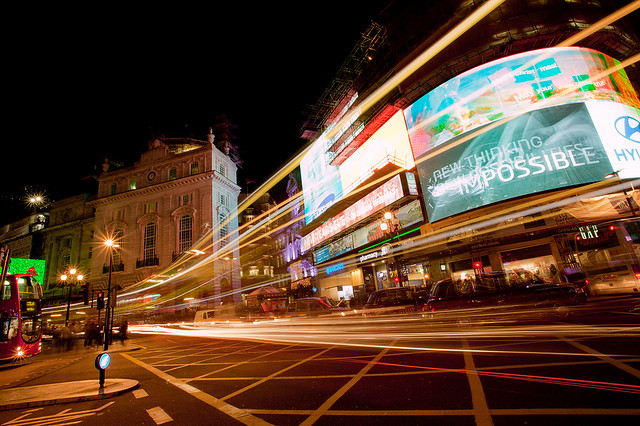 Messages delivered by third parties for payment on social media raises a number of ethical concerns, for information professionals and society in general.
(Image c/o Joe Price on Flickr.)

One of the things I have become increasingly interested in (and wary of) is the use of social media, in particular Twitter, for either personal financial gain (via a corporate sponsor), or to push certain agendas. Of course, this sort of thing has been pretty much part of the Twitter landscape for some time now (this article on the phenomenon dates from 2011), but either this trend has increased, or I am noticing it far more than I used to. A couple of incidents recently have raised my interest in the area to such an extent that I felt I simply must write a blog post on it (one incident alone isn’t enough to pad out a post, I need two different examples at least to prompt me to sit here and start bashing out a series of letters and symbols).

The first was the news that the Israeli government are offering grants to students if they tweet ‘pro-Israeli propaganda’. According to The Independent:

In a campaign to improve its image abroad, the Israeli government plans to provide scholarships to hundreds of students at its seven universities in exchange for their making pro-Israel Facebook posts and tweets to foreign audiences.

The students making the posts will not reveal online that they are funded by the Israeli government, according to correspondence about the plan revealed in th

This troubles me greatly and, I think, it’s part of a growing trend of using Twitter as a means of covertly pushing propaganda (or misinformation) out into the public domain. Without an awareness of the funding aspect, such tweets not only undermines everything that individual tweeters tweet, but also Twitter itself. Suddenly, everything becomes suspect. Who else is pushing out tweets with an agenda, trying to covertly influence public opinion? If we are not aware that an individual has been sponsored by either state or corporate actors, how can we properly evaluate what they are saying?

I was reminded of this story recently when this tweet popped up in my timeline. Whilst a reasonable comment on the iPhone, a bit of digging into the tweet author raises some questions. A quick check of his bio indicates that the aforementioned tweeter works for Telefonica. A further search on Google revealed this story:

Telefonica, one of the world’s largest carriers, has signed a deal with Microsoft to promote far more heavily the software giant’s Windows Phone 8 operating system and devices running it.

Telefonica said that its move is designed to enhance competition in the marketplace. The company said Wednesday it wants to “encourage the presence of additional mobile operating platforms as an alternative to the current duopoly of Android and iOS, and provide customers with a more personal smartphone experience like Windows Phone offers.”

[Yes, that is a terribly written article, see other sources here and here.]

I’m not suggesting that the author is posting tweets as part of some grand corporate strategy, that would be a little far-fetched, but one wonders to what extent corporations actually deploy such tactics. After all, if nation states are using the technology to engage in more subtle promotion, you can be sure corporations are and have been doing so for some time (when have you known the public sector be one step ahead of the private sector?). Stealth marketing is, of course, a well-established concept and Twitter (and social media in general) makes it much easier to push out promotional materials from seemingly independent accounts. How can we be sure whether @X is tweeting about a product or service because they value it, or because they are being paid to be seen to value it?

Of course, marketing people love social media, particularly tools such as Twitter. Here is a service which enables a corporate entity to interact directly with both customers and potential customers. That’s a powerful weapon for any business or service. But, of course, utilising it effectively requires care and subtlety. It’s no good being the virtual equivalent of Piccadilly Circus, blazing loud messages out into the ether whilst thousands of people walk past or chatter away oblivious to the messages being pumped out around them. Sure, you’ll pick up a few along the way (who may well then broadcast your message to their audience), but to a significant number you will become background noise and a more sophisticated approach is warranted (besides, no marketing strategy should focus purely on one tactic). Most people do not want their feeds cluttered with corporate messages, they want such messages to be as unobtrusive as possible. Which is why, for those wishing to push out a certain agenda, alternative methods to push out such messages are sought. If it means paying a third-party (a willing customer, a celebrity or an employee) to push those messages out for you, then so be it. As long as the message does not come direct from source. The more removed the message, the more effective it becomes.

However, once the message does become removed from source, certain ethical questions are raised. Individuals are no longer providing ‘personal opinions’, they are providing opinions for money. Once opinions are provided in this way, it then devalues the entire output of that individual. How many other ‘opinions’ have been formed as a result of payment? Can anything they say be taken at face value? Once it is clear that your opinions can be bought, your output becomes valueless.  As Bill Hicks once argued, if you do a commercial, “everything you say is suspect” (I’ll let you look up the rest of that quote…).

It’s difficult to know, however, how this can be tackled. In part it’s just a case of being aware that there might be a particular agenda at play, but then you also don’t want to view with suspicion every single thing that is tweeted by someone referencing either a service or product. Some people may be genuinely endorsing a product or service without financial gain, I see little problem with that. However, when there is a financial incentive behind the tweets that are being posted it clearly becomes problematic. Not only does this kind of tweeting raise questions for the online community in general, it particularly raises a number of issues for librarians and information professionals.

First, it makes it difficult to evaluate published materials. With a lack of transparency about the motives and agendas behind a series of tweets, it is hard to determine whether tweets are genuine opinions and beliefs, or merely the opinions and beliefs of a corporate (or state) sponsor. Taking the example of the accounts to be sponsored by the Israeli government, how will it even be possible to determine whether published opinions are actually those of the Tweeter in question, or whether they are opinions given for financial reward? It could possibly be determined, but it would take a lot of work, far more work than the average Twitter user has to investigate the authenticity of a tweet or tweets. And who is really going to take the time to find out whether X’s comments about the state of Israeli society are an accurate reflection of the reality? I’d be surprised if anyone does.

But it also raises questions about our own ethical principles. How would we square tweeting for financial reward given our professional ethics? It’s not acceptable for anyone, in my view, to sell their opinions in this way, but is it even more problematic if you are a library and information professional? If you clearly state you are such, is there an expectation by the general public that you will hold the highest ethical principles at all times, no matter how unfeasible that might be? When people see ‘librarian’ or ‘information professional’ do they see ‘disseminator of impartial information’? Is it unreasonable if they do? Can any professional truly be held to the highest ethical standards at all times? Likewise, would it be acceptable for operators of an official library account to offer rewards to those who post positive tweets about the service?

But as well as raising questions about our approach to social media, it also raises questions about how and whether we as a profession can tackle the problem. Is there actually anything that we can or should do? What, if anything, can actually be done about covert sponsored social media statements by anyone? Is it about awareness and validating everything everyone tweets or posts? That would surely be too time-consuming and needlessly paranoid/cynical? We don’t want to get drawn into a habit of being sceptical about the motives behind every single thing that people tweet or post. Perhaps all that we can do is to be aware of the problem and to try, wherever possible, to lead by example. For if our opinions and beliefs can be bought, compromising our professional, ethical principles in the dissemination of information, who is left for anyone to trust?