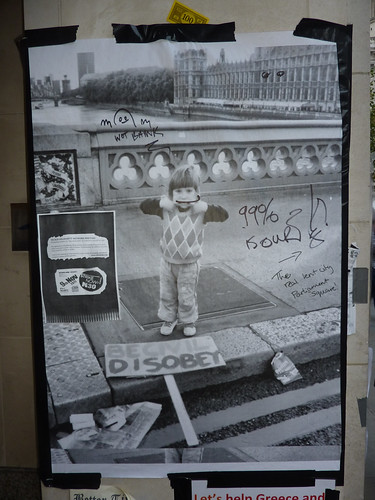 I’m not normally into writing down my reflections on things, but I thought I’d jot down a few things I’ve learnt over the past couple of years as a result of my involvement in library campaigning.  Whilst it is borne out of my (fairly limited) experience of library campaigning, it might possibly be of interest to those who are thinking of getting involved in campaigning in general.  And with the current climate as it is, the likelihood is that more people will start campaigning for the things they care about…joining existing campaigns or starting new ones.  So, here are some of my thoughts based on my experiences so far…

1)      It’s hard. Well, best get this one out-of-the-way first of all.  I ain’t going to beat around the bush, it is hard work.  Hard and often demoralising.  You deal continually with a drip, drip, drip of bad news.  That’s the nature of the beast unfortunately.  When you are fighting for something that does good, it stands to reason that any attack on that is inherently depressing.    However, this can take you in one of two ways.  It can either galvanise you and make you more determined to push on and fight for what you believe in, or it can slowly grind you down until you can’t take it anymore.  Some people thrive on it, some don’t.  But it would be wise to be conscious of this before you commit to something. Don’t let it stop you, but make sure you are prepared for it and have some kind of coping mechanism.

2)      Some people on your own side will try to shoot you down.  Again, another depressing one I am afraid and one that I have personally been victim to.  No matter how much you fight for people, some people won’t appreciate your efforts.  They will disparage you, they will ridicule you and they will make it quite clear to you that they would rather you went away.  Whether this is borne out of guilt from not doing anything themselves or whether it is simply pure malice, there will be those you are fighting for (yes, fighting for) who will try to bring you down and damage your spirit.  It will hurt and you will dwell on it every time you look for reasons to give up.  But they are best ignored.  The vast majority will be behind you.

3)      Learn the art of compromise. In any campaign you will be dealing with a wide variety of individuals with different outlooks and different political viewpoints.  If you all pull in your own direction and refuse to compromise, your campaign will fall apart quicker than you can blink.  Instead you have to accept that sometimes the group will take decisions that you are not comfortable with.  That’s tough.  You chalk it down as a defeat that time, but there will be times when people will make sacrifices to support your proposals.  If you don’t work as a team and make those concessions, you will not succeed.

4)      Language is important. This is particularly important for when you are engaging in debates with people who either disagree with you entirely, or who are possible converts.  Language and how you use it is absolutely key.  It is the difference between a successful campaign and an unsuccessful one. To take an example from my own experience, I am aware that some people think the phrase “save libraries” is unhelpful.  Perhaps in some respects this is the case, it’s hardly a positive phrase to rally people around.  But then some other options are not much of an improvement.  For example, I’ve seen talk that “support libraries” is an improvement but on closer inspection it is a rather superficial alternative.  When opposing privatised or volunteer run libraries, “support libraries” comes across as a confused rallying call: “we support libraries but not these types of libraries.”  “Save libraries” isn’t perfect by any means, but it doesn’t paint you into a corner like some alternatives.  So, choose your words carefully!

5)      Campaigning is good for you! Ok, this is a little superficial but there have been some heavy points up until now so I wanted to balance it with something that might actually encourage people to campaign!  There is a perception that campaigning will be negative for your career.  You will be seen as a trouble-maker, someone who speaks their mind, a member of the awkward squad.  But the reality is that as well as the satisfaction in fighting for something you believe in, you develop a huge number of skills.  In my time involved in fighting for libraries I have chaired meetings; delivered a speech at a rally; been invited to talk about “breaking out of the echo chamber” for a national librarians’ conference; been interviewed by local radio, national radio, French radio and the national press; built contacts with national media and helped co-ordinate a number of nationwide events.  If you don’t think these things are good for your development, well…you’re way off the mark. So, that’s the superficial one out-of-the-way.

6)      You need to manage your time effectively! As I said at the beginning, campaigning is hard.  It takes up a fair amount of your time if you are not careful.  If you have a family, this can create some serious problems.  So, you need to develop your time management skills like a pro.  Ensure you have time away from doing any campaign type stuff, go out, see friends, go to gigs, get drunk, have fun, anything other than spending every waking hour fighting the good fight.  Sure, you’ll get the urge to spend a couple more hours on this or that, but you will do yourself and the campaign some good if you keep yourself fresh and enthused.  Bog yourself down too much and you will soon tire and create substantial problems for you and your family.  And this is also where teamwork comes into play.  Not only is it important to compromise with your fellow campaigners, it is also necessary to share the workload. If you don’t, stress and resentment will soon grow.

7)      Move fast. One of the key things I have learnt about campaigning on anything is to be quick out of the blocks.  This is the case particularly when making public statements.  Be the first to be seen to respond to an announcement or an action and you will have the ear of the press who will want to get stories out quickly to meet challenging deadlines.  Leave your response until 24hrs after the announcement and you will be ignored.  Be clear, be concise and be quick. This is easy if you are a small nimble organisation, much more difficult if you are a large national body.

8)      Exploit social media. The opportunities for campaigning organisations starting out now are manifold.  Whereas before it was expensive and time-consuming to campaign on an issue, now it is relatively easy to get a campaign started and draw attention to your cause.  If you aren’t fully up to speed with the range of social media tools out there, make sure you make that a priority.  Good campaigners are good social media operators.  Used effectively, social media can also play a big part in helping to manage your time more effectively.  A lot of social media tools enable things to be posted automatically without the need to spend an awful lot of time updating all your social media channels (Buffer is well worth checking out in this regard, as is IFTTT). Social media is your friend, learn to use it effectively and you will garner attention.

9)      People will get behind you! Whilst some on your own side will try to shoot you down, this is easily outweighed by the people who get in touch with you to voice their support and appreciation for what you do.  Each time you receive such support, it is a major boost to your energy levels.  You can be drowning in a sea of negativity, but just one message from someone saying they appreciate what you do can lift your spirits like nothing else.  Hang on to those moments and reflect on them when you can.  They will get you through the hard times.

10)   It is worth it.  Yes it’s hard.  Yes people shoot you down.  Yes people criticise you for your tactics.  Yes you will have to make compromises.  But you know what, you are fighting for what you believe in and there is no greater feeling than that.