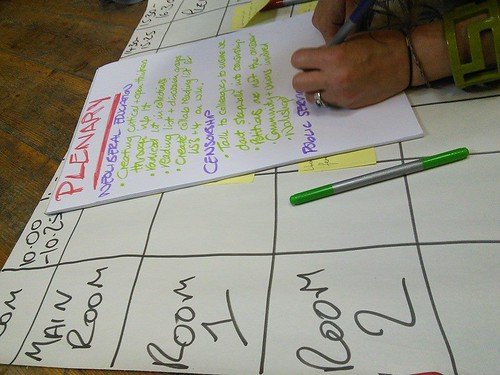 Getting stuff done at RLC London.

A couple of weeks ago now I attended (and was involved in the ‘organisation’ of) the Radical Librarian Collective gathering in London. Since the day, I’ve been struggling to put some of my thoughts into words. Indeed, I’m not sure I can adequately write about the various discussions that took place (head to Lauren Smith’s blog for that). Rather than attempt to write a comprehensive ‘review’ of the day, I thought I’d just make a few broad brush observations and write about it in more general terms.

Last year, I got together with a few like-minded folk who shared the same sense of longing for something a bit different. From my own personal perspective, I have been alarmed by some of the discourse across the profession for a few years now. There has been a rapid process of depoliticisation of the profession that has become increasingly noticeable in recent years (although arguably it has been part of a long-term trend – as it has been with most professions). There has been a general shift towards the rhetoric of ‘the market’ without serious consideration of the implications of doing so. We have perhaps become increasingly uncritical and, as I have noted recently, perhaps have not paid enough attention to the implications of the language that is increasingly utilised in professional discourse. For me, discussions that challenge this are welcome, and so I was really grateful for the opportunity to gather with like-minds and, as they say, ‘unpack’ some of these issues.

Bradford was, I think, a great success. It sprung together from nothing and turned into something that I think we were all really proud of. It was something new, something fresh, something that many of us who were there on that day felt was much needed. I think it’s fair to say that many people came away from it both reassured that there were others that felt the same, and keen to take ideas forwards. That said, I feel that London appears to have been the real catalyst to start building stuff.

As with any effort to actually do stuff, organising RLC London was not without its sneering. If there’s one thing I have learnt about people, it’s that people are happy to complain about various issues but should anyone step up to tackle them, they effectively become a target to be shot at. I’ve personally experienced this several times over (with Voices, Informed and RLC), try to actively do something rather than just moan and you will be a target for cynicism and sneering. To the extent where you begin to wonder whether there is an issue of prejudice at play (educated working classes should pipe down and know their place etc – and if you are an educated working class woman, you are in for some serious sneering). Sometimes it’s difficult to keep the sneering at bay. There will always be cynics trying to smash down your optimism, the trick is to remain optimistic and focus on the positives.

RLC London was, without doubt, an inspiring day. It helps, I think, that everyone in attendance was on roughly the same page. Sure a bunch of radical minded folk in an enclosed space could turn into a massive, dare I say, ‘echo chamber’ reflecting and entrenching existing viewpoints as everyone nods along in agreement. There were, however, some really engaging and challenging conversations throughout the day helped, perhaps, by a smattering of people who perhaps wouldn’t describe themselves as ‘radical’ but had certain perspectives that, in the current climate, might well be described as such.

In terms of the sessions (again, I’m not going to go into these in great detail), I attended discussions on censorship, a session on the LIS qualification, critical theory, a session on how to take the discussions and ideas back to the workplace and finally a plenary session to discuss how we take things forwards as a collective. What I found really interesting and valuable about the day was how themes ran through all the sessions. You could have a discussion about censorship which would then feed into discussions on the qualification which would then feed into discussions on critical theory. Everything was linked, helped by the event itself being broadly themed I guess.

With regards to my session, I wanted to look at the qualification and how both libraries and the professional body can and should be constructed in line with our professional ethics. This was too much for one session as I soon discovered. I ultimately decided to divide it up into three discussions, but there was only time in the day to explore one (the other two will have to be explored another time!). The discussion itself was really interesting (from my perspective) as we wrangled over the extent to which the qualification should focus on practical, vocational stuff and the theoretical/ethical side. There was much discussion about the way the LIS qualification is increasingly losing the theoretical/ethical aspects and focusing on things that will ‘get you a job’.

For me the qualification has to be built on strong foundations, which means a strong theoretical and ethical underpinning that the other stuff can be built on top of. There needs to be an element of practical stuff that can be applied within in the workplace, but there also needs to be a fundamental understanding of the ethical underpinning. Which takes us back to the start of this post, the depoliticisation of the profession. This starts on LIS courses. If we don’t tackle the problems at the heart of the qualification collectively, then we will continue to depoliticise ourselves and devalue our profession (this does not mean we all have to be radical political types, it just means we need to have an understanding of some of the socio-political issues that affect every aspect of our work). It is for this reason I think there needs to be serious discussion about what we want from our LIS programmes.

Back to the day itself (after promising not to go into great detail on any of the sessions and finding I already have)…I think what I took away from London more than anything else was the enthusiasm to build on the discussions. To build networks. To create stuff. To tackle issues in whatever way we could as a collective. There was a real will to take these discussions and not just walk away, patting ourselves on the back for having a jolly good chat, but to actually construct networks and seriously address some of the concerns that had been raised. This made me feel really positive and really excited about where the discussions might lead. Already local networks are being organised, a “Declaration on open access for LIS authors” has been collaboratively developed, and who knows what else will emerge from these discussions. Yes, when it comes to stuff like RLC London, it is very hard to smash the optimism. After all, as I now like to remind myself: