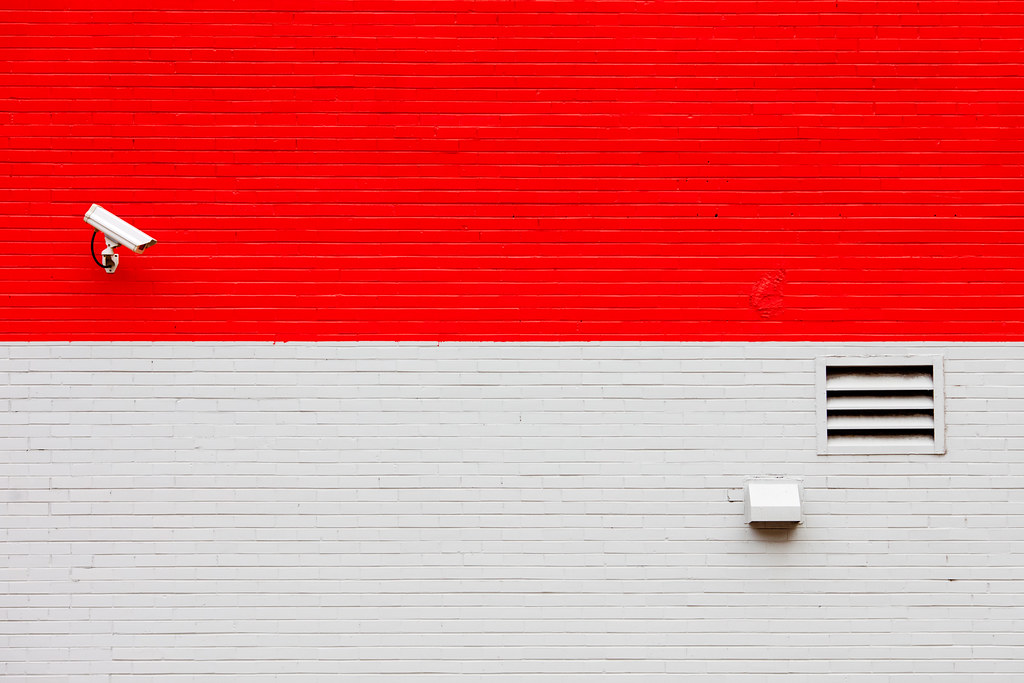 In an era of unjustified, economically incoherent cuts in investment in public services, there has been an increasing drive to make various parts of the public sector work together to cut costs (“cut costs” in a very superficial sense of course). One such collaboration that keeps popping up is a partnership between the police and public libraries. An idea that should never even be entertained, let alone discussed as a serious and reasonable proposition.

The latest such proposal is one that would see one particular police force close down its inquiry desks and effectively move them to the local public library service, requiring library staff to assist in the reporting of crimes online for those without internet access at home. According to a statement on the Norfolk constabulary’s website:

The six month trial will run from the end of September in Thetford and Gorleston and will involve library staff signposting customers to police services, while also helping them complete online self-reporting forms, a function which will soon be available as part of the Constabulary’s new website.

Such a move changes the library space from a safe one, to one that is subject to a subtle form of surveillance whereby people’s behaviours are modified by the knowledge that the space is one where the police have a presence, even if in abstract. Effectively, it normalises surveillance. The knowledge that it is a space to report crime impedes the library as a space to freely engage in ideas, particularly in the current political climate.

Take Prevent, for example. A racist strategy that demonises non-whites, it has led to a series of actions that have been an affront to the rights of the individual, particularly in terms of intellectual freedom, both directly and via the culture that it has encouraged. The recent detainment of Faizah Shaheen being a good example of the consequences of not only the normalisation of surveillance but the encouragement to “snitch”.

The experiences of Faizah Shaheen and Mohammed Umar Farooq should serve as a warning to library workers and those providing library services. Where there is a police presence, no matter how abstract it may be, there is a risk to people of colour. Facilitating police reports in libraries has a very obvious and malign consequence. It makes the library a space of authority and control. In an environment whereby people are detained due to their reading habits, using a public library as an extension of the police inquiry desk poses threats not only in terms of people reporting individuals (although this online crime reporting will happen in the library whether the library encourages it or not, the key is the normalisation of the space as a place to interact with the police), but also has an inhibiting effect upon those using the space.

Would a person of colour feel comfortable accessing information or borrowing books if they do so in an environment that encourages and enables the reporting of crime, particularly when reading can lead to detainment under anti-terrorism legislation? Individuals will feel that they cannot access information freely in an environment that has become an extension of the police station (which is partly how surveillance works – controlling and directing individuals, preventing activity from taking place).

This relationship with the police continues to be proposed in authorities across the country. Earlier this week it was revealed that police desks in Angus would be moved into the council’s libraries. And there have also been “community police hubs” (how innocuous sounding) relocating to public libraries. And what’s coming around the corner should very much set alarm bells ringing about the suitability of public libraries and the police sharing space, whether it be abstract or physical.

Earlier this year, it emerged that under Theresa May’s proposed investigatory powers bill, public libraries will be required to store internet users’ records for up to 12 months, again, seriously undermining the library as a safe space for intellectual freedom. Not only does such a move normalise surveillance, making it part and parcel of every aspect of every citizen’s life, but it turns public libraries into a space less about intellectual freedom and more about monitoring citizens on behalf of an authoritarian state. It goes without saying, that this poses a threat to the very notion of intellectual freedom, a notion that public libraries should be actively defending and advancing.

As public libraries increasingly become a place where the state seeks to control and observe the intellectual behaviour of others on the basis of supposed threats posed by organised terror, so public libraries lose their purpose. They cease to become places of exploration and interrogation and become nothing more than repositories of state sanctioned ideas and values. This process of normalisation needs to stop, for the benefit of all the communities we serve.

So, it emerged today that Paris Brown has stepped down as the country’s first youth police commissioner, before she had even really started the job.  I cannot condone the comments that she had made on social media, they were appalling and insulting, but I think it is worthy of note that these comments were made before she was revealed in the post and, crucially, by a teenage girl.  Let’s be clear, this does not mean that I believe all teenagers make stupid public comments, but I think we can all accept that very few people went through their teenage years without saying something they later regretted (not to mention in adult life).  However, there is one thing that stands out for me above all else in the way this story has been reported, and that is the disreputable actions of the Daily Mail.

This tweet (which can no longer be found as the account has been deleted) underlines the disgraceful nature in which the Daily Mail has behaved: 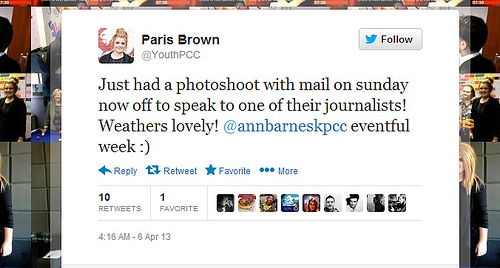 Note the date. 6th April 2013 (ignore the time on the datestamp, Twitter sometimes gets that wrong for whatever reason).  The very next day, the Mail splashed its exclusive.  Think about that for a moment. On the very day it was planning a story designed to destroy her reputation, it invited her up for a photoshoot and a chat with one of their journalists.  All the while, they must have known what was being planned.  Frankly, I find this absolutely disgraceful behaviour by all those concerned.  I’m not surprised she was devastated with the story.  She had been lulled into believing that the lovely Mail were giving a 17 year old girl some positive coverage for doing something for her community.  Instead, she was being made to look a fool.  I guess we shouldn’t be surprised by this, but still…

I have been trying all day to ask the journalist responsible for the story, Russell Myers, why the Mail acted in this way. Despite having only 400 followers (and therefore fairly unlikely to be inundated with tweets), he has continually ignored my question.  Maybe he feels ashamed.  Maybe he doesn’t give a damn.  But either way, I think both he and his colleagues have behaved disgracefully over this story.  Of course the press are right to investigate and scrutinise.  But to abuse in this way is disrespectful and outrageous.

One last thing I would add, it also emerged that the police are investigating her tweets. This seems to me to be a spectacular waste of time and tax payers’ money (ironic given the Mail’s actions led to the investigation).  And I sincerely hope they do not pursue it any further. (Edit 9/4/13 20:51pm I didn’t make it very clear here but, as pointed out in the comments, the police are obliged to investigate where complaints have been made. The police are not at fault for this, they are merely performing their duties.)

So well done the Mail. You treated a 17 year old girl as a fool and brought about a police investigation into some distasteful tweets. So much for standing up for taxpayers and freedom of speech. Not doing a good job of proving that Leveson recommendations shouldn’t be implemented are you?

I’ve repeatedly contact the author of the story for an explanation as to why they felt it was necessary to invite Paris for a photo shoot and a chat when they were already planning this story.  If I get a response, I will post it here.

@rjmyers Have repeatedly asked you but had no response so I blogged about it instead. If you want to respond, let me know.