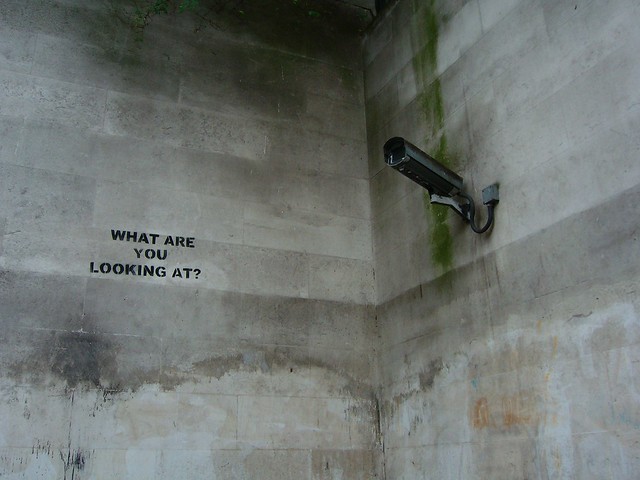 Towards the end of last year, I was privileged to be invited to talk at CILIP’s Multimedia Information and Technology (MmIT) Group AGM about digital inclusion as a representative of the Radical Librarians Collective (see the presentation below – which includes a list of recommended reading!). The invitation was well timed in terms of coming up with a focus for my talk as I have spent the best part of 5 months working on a journal article for the Journal of Radical Librarianship on the digital divide (which, pending peer review, will hopefully be published in the early part of this year). Specifically, I’ve been interested in looking at digital inclusion from a slightly different angle, that of the divide in terms of state and corporate surveillance.

As followers of this blog will know, I’ve been talking about surveillance and the Snowden revelations for some time now. Concerned about the gathering of information about us, whilst the state seeks to limit the amount of information we obtain about them, I’ve mainly been focused on the impact this has in terms of our democratic processes. However, since the emergence of the Library Freedom Project (founded by the awesome Alison Macrina), I’ve been increasingly interested in the role that libraries and librarianship has to play in this area. It seems to me, that the disclosures have to expand the terms by which we define what the digital divide is. Whilst there has always been a focus on access, and on skills, there must be greater attention on what people actually do online and, furthermore, the extent to which individuals are able to act freely in terms of seeking information.

Being able to seek out information that offers alternatives to the status quo (indeed, not just “offers” but challenges) is vital in a democratic society. Without the ability to seek out and understand alternatives, it is hard to accept that our society can possibly be described as “democratic”. What is clear from Snowden’s disclosures is that the ability to seek out information and communicate with others whilst ensuring your intellectual privacy is increasingly difficult. Difficult unless you have the skills and knowledge with which to defend your intellectual privacy.

I tend to think that I am fairly skilled in terms of using the internet. I can seek out information quickly and efficiently, I can provide assistance for others, I am fairly innovative in the ways in which I use certain online services. What I lack, however, is the skills necessary to really ensure my intellectual privacy, to defend myself against state or corporate surveillance. I have some skills, I have some basic knowledge, but I don’t know how to protect myself fully. And yet I consider myself reasonably skilled. What about those that have difficulties in using the internet in a basic way? What about those that struggle to do the things that I take for granted? Aren’t they even more exposed to state and corporate surveillance? Isn’t their intellectual privacy even more under threat? Surveillance tends to affect the most disadvantaged to the greatest extent, is intellectual privacy something only for the privileged?

I don’t want to get into this even further here (wait for the longer version!), but I do think there are issues here about the nature of the digital divide and how we should view digital inclusion post-Snowden. There was a time when it was considered fanciful that librarians could even consider to provide the sort of skills that the state may see as a threat to the status quo. However, the efforts by the Library Freedom Project in the United States underlines that this is no longer the case. If librarians in the United States, the home of the NSA, can help people defend their intellectual privacy, why can’t we do the same in the United Kingdom? I’m not suggesting that we can collectively as a profession start setting up Tor nodes in libraries or teaching people how to use encryption technologies, but we need to have the debate about how we ensure the intellectual privacy of everyone in our society, not just the privileged few.

CILIP’s Ethical principles for library and information professionals states that we must have a:

“Commitment to the defence, and the advancement, of access to information, ideas and works of the imagination.”

If we are to defend and advance that access to information then we must, in my mind, do whatever we can to defend the intellectual privacy of everyone.

You can also download a PDF version of this presentation here [PDF – 6.29MB].