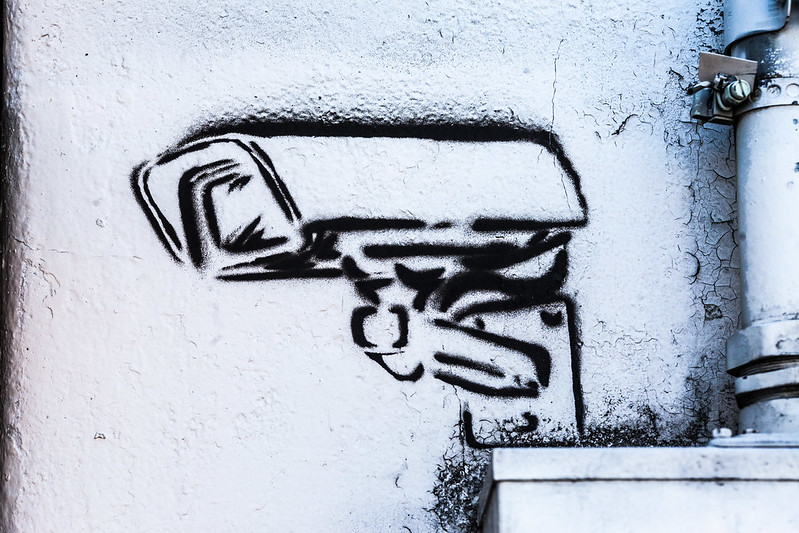 Mass surveillance is a serious threat to the ethical principles of librarianship and the communities we serve. (Image c/o Thomas Hawk on Flickr.)

Despite not being a member of the professional body, one of my current favourite documents (there’s a series of words you don’t often see next to each other) is CILIP’s Ethical Principles for Library and Information Professionals (bear with me). Two elements particularly stick out for me and have become key elements of the presentations I have been delivering lately (and will deliver in the future):

3. Commitment to the defence, and the advancement, of access to information, ideas and works of the imagination.

8. Respect for confidentiality and privacy in dealing with information users.

The post-Snowden era has resulted in a very clear and serious threat to these ethical principles. Indeed, I would argue that we have largely failed in this regard following the introduction of internet access in our libraries (in whatever form the library takes). Under conditions of mass surveillance it is clear: we cannot defend access to information and we cannot ensure the privacy of our users without providing the tools to ensure online privacy – whether that be through the availability of privacy enhancing tech in libraries or through working with users to provide them with the skills and knowledge with which to do so.

The current lay of the land politically suggests that this problem is not about to go away, it is actually going to get much worse. The elevation of Theresa May (presented as a kind of softer One Nation Tory – see here for more on One Nation Conservatism) certainly suggests that the threats we face to our ethical principles are not about to be brushed away, but instead become more pressing. We know that May has a particularly strident approach to mass surveillance, not for nothing was May named “internet villain of the year” at last year’s Annual UK Internet Industry Awards. It seems highly unlikely that upon becoming Prime Minister, May will suddenly abandon a long-held belief in mass surveillance, a policy that is a very serious threat to our ethical principles as outlined by CILIP. The question is, how will we as a profession tackle this threat.

The signs from the forming of Theresa May’s new cabinet are already pretty clear that the pursuit of mass surveillance legislation is very much still on the agenda. Her appointment of Boris Johnson as Foreign Secretary reinforces this threat. As Foreign Secretary, Boris Johnson will also head up both GCHQ and MI6. Johnson has been an outspoken supporter of May’s drive towards enshrining mass surveillance into law. Only last year he declared in relation to the Snooper’s Charter:

“You’ve got to have a very tough security solution, you’ve got to be absolutely determined to monitor these people. You’ve got to know where they are and who they are talking to.

“I’m not particularly interested in all this civil liberties stuff when it comes to these people’s emails and mobile phone conversations. If they’re a threat to our society then I want them properly listened to.”

I’m not particularly interested in all this civil liberties stuff. And if we are in any doubt that his words match his actions, a quick look at his voting record suggests that he is very firmly pro a strategy of mass surveillance.

As for Theresa May’s replacement, well, I think it will come as no surprise to learn that Amber Rudd is also supportive of the rush to mass surveillance. Generally speaking, where she has turned up to vote, Rudd has generally voted for the “mass retention of information about communications” (or “mass surveillance” if we are to avoid euphemisms). So, both of the key main positions related to the introduction of mass surveillance legislation are very much in the “pro” camp. There is no doubt whatsoever that the government is shaping up to pose very serious threats to our ethical principles, as has been standard practice on the right for some time, ethics are simply a barrier to “progress”. It’s of little surprise to learn that our ethical principles continue to be threatened by a right-wing government, it’s what they do.

But what of the Opposition? Well, it’s not that much better. However, the current attempted coup against Corbyn could result in a unified threat to the ethical principles outlined. Whilst there is not conformity across the Labour Party on this issue (ha), Corbyn at least seems a bit more sceptical of mass surveillance than many of his colleagues. He at least voted to reject the Data Retention and Investigatory Powers Act in 2014 for example. What of the plotters in his party though?

Angela Eagle appears to offer little in the way of opposition in the threat against our ethical principles. Generally speaking, she has voted in favour of the mass retention of information about communications. And what of the other challenger, Owen Smith? Well, Smith has voted consistently in favour of mass retention of information about communications. So, should the coup be successful then it seems pretty clear that both sides of the house will be united in the belief that mass surveillance of the population is necessary. Of course, given the lack of party discipline at present, they will be effectively united even if Corbyn remains as leader because he is unable to command so many of his colleagues. There are really only two options I can see in terms of serious opposition to mass surveillance, the party respecting the wishes of the members and uniting around Corbyn, or mass deselection. Otherwise, mass surveillance is a foregone conclusion and CILIP will need to re-write their core ethical principles – because they will be worthless.

(I feel I should add here by way of caveat…I am not a Labour voter. Nor am I a Labour Party member. I’m not sure Corbyn is the right person to take the Labour Party forward, but I do think his politics are right for the future of the Labour Party. Corbyn may not be the right leader, but he holds the “right” politics. Unfortunately for those seeking to unseat Corbyn, they think both his leadership and his politics are wrong. I think this is a strategic error that will likely end the Labour Party for good. For me, a return to the gentrification of the party to ensure its appeal to the middle class will ensure its final demise in a climate where the working class have been hammered hard. But the fight for the party is not my fight, I am merely an observer.)

Whatever the future holds in this uncertain time, I’d recommend that all information professionals take a good look at those ethical principles and ask the question as to whether they are currently holding true to them. I’d also argue that we need to raise awareness of encryption technologies across the profession and beyond (taking the lead from key figures associated with the Radical Librarians Collective), particularly if we hold that our ethics are worth defending and advancing. We particularly need to be aware of what encryption tools will be effective and which will not, given the proposed legislation heading our way. I hope that CILIP batters the doors of government every single day brandishing those key ethical principles and fights for our profession and the communities we serve. These principles are under serious threat, by both sides, and for the sake of our existence and the sake of the people and communities we support, we must not allow them to become redundant.