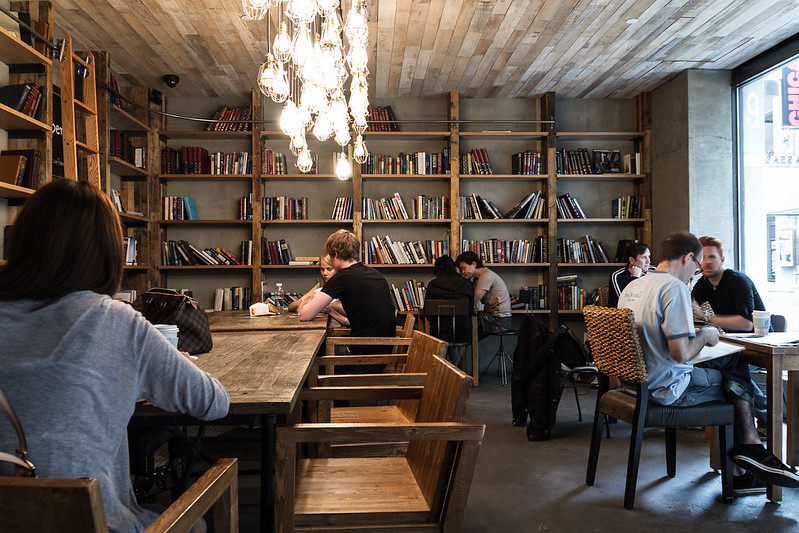 The following article was written for Information Today Europe, my thanks for permission to re-share the article here.

Digital natives. It’s a phrase that’s been commonly used in the media for some time now. Whether it’s in scare stories about the “decline in reading” to a supposed shift in work environments to how people engage in the democratic process, it’s a term and an idea that is pervasive when it comes to how we talk about the ways in which people use the internet. Pervasive, and yet entirely misguided. There is, of course, no such thing as a digital native, it’s a lazy reductive media term to describe a much more complex set of behaviours.

The theory of digital natives emerged as a result of a paper by Marc Prensky called Digital Natives, Digital Immigrants [PDF] in which he noted a radical change in students thanks to their immersion in new digital technologies. Prensky labelled these students as “digital natives” – ‘“native speakers” of the digital language of computers, video games and the internet’. Alternatively, Prensky identified those that were not born into the digital world but have latterly adopted the technologies as “digital immigrants” – ultimately dividing individuals between the two groups when it comes to digital technologies.

Of course, this theory now sounds not only misguided, but dangerous given the assumptions it makes about individuals and how they engage in digital spaces. Indeed, since espousing this theory, Prensky has moved on from this notion of natives and immigrants inhabiting digital spaces. However, this theory still maintains a hold on media narratives due to the simplistic interpretation of a complex idea that divides people neatly into two camps. So if even Prensky has moved on from this model, how can we effectively describe and identify the use of digital technologies?

In 2011, David White and Alison Le Cornu posited a new way of looking at how people engage with digital technologies. Acknowledging the flaws in Prensky’s theory, they argue that the actual picture is far more complex. For White and Le Cornu, engagement with digital technologies isn’t so much a fixed thing (ie you are either a “native” or an “immigrant”), rather they propose that engagement with digital spaces is actually on a continuum. In their paper, Visitors and Residents: A new typology for online engagement, they introduce the concept of two particular types of behavior – visitor behaviour and resident behavior (vandr). These behaviours are defined as follows:

Visitor – visitors get what they want and go, they don’t see the internet as a social space and have no interest in prolonged engagement.

Residents – residents see the internet as a social space and are happy to engage with others.

White and Le Cornu argue that the majority of people flit between the two behaviour types. One may exhibit visitor behaviours when, for example, they are booking flights or when visiting websites for a very specific purpose without wishing to leave behind a digital footprint. Alternatively, people exhibiting resident behaviours will have a tendency to engage, to use the internet as a social space to engage with others. Generally speaking, the vast majority of individuals move between the two, sometimes behaving as residents, sometimes as visitors depending on their needs or motivations.

This approach to understanding internet behaviours can be a particularly valuable way to consider the ways in which we deliver and facilitate access to information. Once we understand the ways in which people use the internet, the behaviours they exhibit and the needs they have, we can better orientate services to ensure that these needs are met effectively. For example, how we use social media in the context of visitor and resident behaviours can be a useful way to consider how these tools are utilised, ensuring that they are orientated in a way that takes into account these behaviours.

However, it’s also important to note that these modes aren’t necessarily an indicator of skill in utilising social media. As Donna Lanclos, anthropologist and noted critic of the “digital native” theory, puts it:

Social media and visitor behaviours are not, therefore, mutually exclusive. You can still act in visitor mode and use social media as a tool, just a tool with a specific focus rather than as a tool to facilitate communication.

This theory of internet behaviours has had a substantial impact in terms of the ways in which I view social media and how I can use make more effective use of these tools. It has been, for me, a really useful way to frame social media use, focusing on particular tools, looking at how they are used and then considering the behaviours that they suit, and adapting their use to take advantage of this.

For example, blogs have great potential to be used as a tool to meet visitor behaviours. In my current role, I have orientated my blog to provide content for my School in a nice simple format, enabling them to access information quickly and efficiently. In providing a space that packages up key pieces of information in a way that is clear and accessible, I ensure individuals can get what they want and go. No more hunting around for guides on databases, a clear section on my blog provides a full list of the main ones. We know that when people want to access information, exhibiting visitor behaviours, they just want to be able to access the information quickly and efficiently. Large library websites are often a barrier to this, a more focused blog offers a way to meet visitor behaviour without provoking frustration as time is wasted finding the information they require.

Alternatively, tools such as Instagram are great tools for those operating in resident mode. As I noted in workshops last year at the NAG conference, Instagram users spend approximately 257 mins per month on the site. At just under 10mins per day, it appears to suggest the tool is used by those happily exhibiting resident behaviors (Pinterest users, according to figures published in 2012, spend approximately 98mins per month, suggesting people use it for a specific task). As I found when delivering my workshops, those in the 16-24 age bracket have long since shifted to the service from Facebook etc as a place to share visual content (a recent Ofcom report found that 35% of 16-24 year olds use Instagram as opposed to 16% of all adults – PDF). With that level of engagement, it clearly makes the case for library services to engage in this space and provide content that takes advantage of the resident mode users appear to be in when using the service.

Whilst it is useful to consider social media in reference to visitor and resident behaviours, it’s important not to be restrictive in how it is factored into social media use. As David White himself explains:

“What’s key here is to recognise that the type of platform does not mandate the mode of use. Apparently ‘resident’ style platforms such as blogs and Twitter are used very effectively by individuals in ‘visitor’ mode. Focusing on mode of engagement rather than specific technologies leads to more elegant and effective engagement strategies.”

Whilst it is useful to use these behaviours as a framework, it’s important not to fall into the trap of believing that Twitter is only ever used in resident mode. Tools such as Twitter are equally used effectively by those wishing to obtain information without leaving a footprint (searches and hashtags are particularly helpful in this regard). Social media platforms aren’t visitor or resident specific, rather they often meet the needs of these modes in different ways.

This notion of behaviours on a continuum is, I think, a really helpful way to consider how people use digital spaces. As Ned Potter puts it, there is the potential to “use social media platforms to provide easy entry points for Visitors seeking information AND use it to add our voice to a more Residential space and provide help and information as part of a community”. Prensky’s approach was very much of its time, but it’s important to move beyond that and understand that how people engage with online spaces is far more complex than the media (and others!) may like to present it.