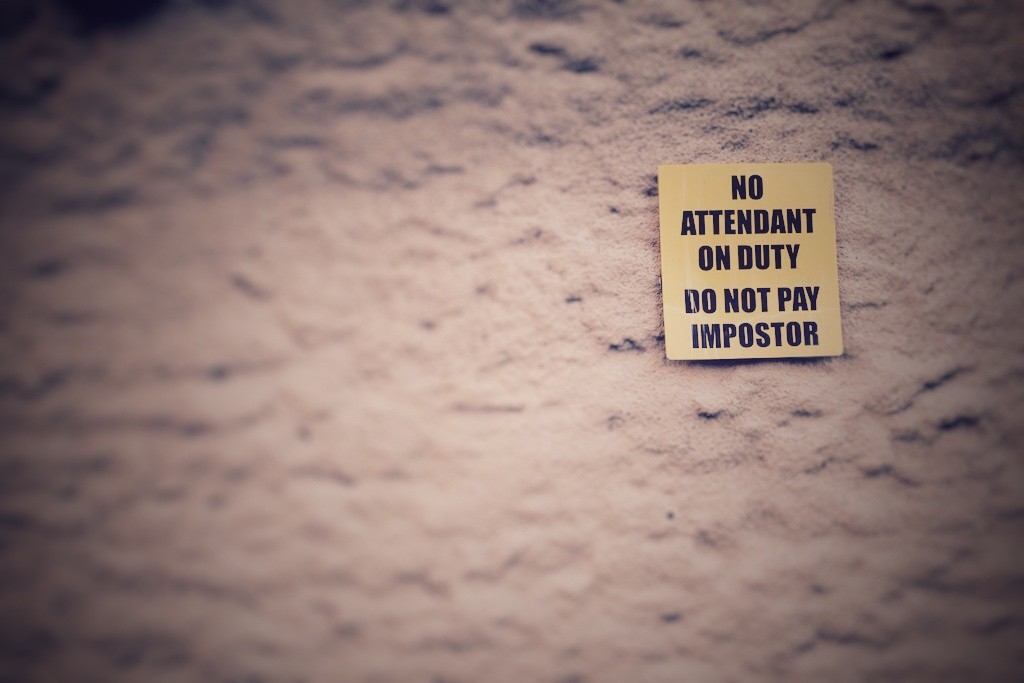 Ever since #radlib15, I’ve been considering“impostor syndrome” and some of the issues that emerge as a result of its existence (read Andrew Preater’s more thoughtful take if you want to skip to the end of this). First, I want to begin by challenging and reframing the term, because it raises issues around the notion of it being a “syndrome” that, by extension, can be treated. I think the reality is that rather than a “syndrome” it could equally be considered as a form of indoctrination and perhaps should be more appropriately termed “impostor indoctrination”. Indoctrination, because I would argue this is a feeling that is imposed upon us we are supposed to have, rather than something that emerges due to an irrational thought process. It is a constructed state of mind, rather than the naturalised one that the term “syndrome” implies.

During #radlib15 I identified my own personal experience of this feeling. I come from a working class background, was educated in Kent (a county which still has selection at 11), I didn’t go to the grammar school and instead went to the state comprehensive – because, effectively, I “wasn’t good enough” to go to the local grammar school (it was argued in a tribunal that I would probably “struggle” at the grammar school, whereas I would perform well at the state comprehensive). This was followed by average grades at school, followed by below average university (for my chosen field) and several years of working in retail. I then had the fortune to meet my partner, who is a trained medical professional. Through her financial support, I was able to partake in postgraduate study, get my LIS qualification and, now, practice as a professionally qualified librarian.

The manifestations of “impostor syndrome”

My feeling that has emerged from this experience is one of “I do not belong here”. I come from what I consider to be a working class background, and yet I find myself in a professional that appears to be dominated by the middle class. No matter how my career develops from now on, I will always have that sense that I don’t belong here, because I was led to believe from the age of 11 that this is not for me. I’ll come back to this point later.

What was particularly interesting for me in this session is the perspective of someone who self-identified as middle class in the same session. Their sense was not that they didn’t belong, more that they didn’t measure up to some idealised version of a library professional. Their “indoctrination”, if you like, emerged from some marketised ideal of what a professional should do and behave like. The impostor indoctrination had imposed an ideal. You should be here, and now you are, here is the standard you should attain. I should add at this point that this feeling is not restricted to librarianship, it affects all manifestations of labour.

I think this feeling and how it manifests itself varies according to class, ethnicity, gender, sexuality etc. How I as a white male of working class origin interprets this feeling is perhaps different from a white middle class woman and, likewise, a black working class man. There is no single definition of what this feeling is or how it manifests itself. This is also why I feel unifying such different and varying experiences and feelings as a “syndrome” is not quite an accurate representation of the sense that one is an “impostor”.

I would argue that the feeling is part of an indoctrination process, an effort to control and ensure discipline amongst a broad base. Indeed, I think that Althusser’s Ideological State Apparatus (ISA) theory could be used as a framework for understanding how this emerges. Althusser argued in 1970 that the ISA operated as a way to disseminate ideology amongst the general populace. ISAs exist in all aspects of society, but Althusser argues that the education ISA is the predominant one. Althusser argues:

“It takes children from every class at infant-school age, and then for years, the years in which the child is most ‘vulnerable’, squeezed between the Family State Apparatus and the Educational State Apparatus, it drums into them, whether it uses new or old methods, a certain amount of ‘know-how’ wrapped in the ruling ideology (French, arithmetic, natural history, the sciences, literature) or simply the ruling ideology in its pure state (ethics, civic instruction, philosophy). Somewhere around the age of sixteen, a huge mass of children are ejected ‘into production’: these are the workers or small peasants. Another portion of scholastically adapted youth carries on: and, for better or worse, it goes somewhat further, until it falls by the wayside and fills the posts of small and middle technicians, white-collar workers, small and middle executives, petty bourgeois of all kinds. A last portion reaches the summit, either to fall into intellectual semi-employment, or to provide, as well as the ‘intellectuals of the collective labourer’, the agents of exploitation (capitalists, managers), the agents of repression (soldiers, policemen, politicians, administrators, etc.) and the professional ideologists (priests of all sorts, most of whom are convinced ‘laymen’).”

Which begs the question, if you are expected to have been one of those “ejected” at 16, ie sent down a particular path which made an alternative outcome less likely (eg to become of the petit bourgeois or a “professional ideologist”), would that not instil a sense of being an “impostor” once you emerge as a member of the petit bourgeois or “professional ideologists”? After all, you were identified as not being suitable material for such a position, so to arrive there regardless of the barriers placed in your way must surely create a sense of unease that you had somehow cheated the system and are at risk of being found out?

Althusser goes on to argue:

“Each mass ejected en route is practically provided with the ideology which suits the role it has to fulfil in class society: the role of the exploited (with a ‘highly-developed’ ‘professional’, ‘ethical’, ‘civic’, ‘national’ and a-political consciousness); the role of the agent of exploitation (ability to give the workers orders and speak to them: ‘human relations’), of the agent of repression (ability to give orders and enforce obedience ‘without discussion’, or ability to manipulate the demagogy of a political leader’s rhetoric), or of the professional ideologist (ability to treat consciousnesses with the respect, i.e. with the contempt, blackmail, and demagogy they deserve, adapted to the accents of Morality, of Virtue, of ‘Transcendence’, of the Nation, of France’s World Role, etc.).”

The education ISA is fundamental in schooling individuals in the dominant ideology but also in providing them with the ideology that suits the role they have to fulfil in society. If we then find ourselves in a position that we were not destined to fulfil, ie we were put on a path that pre-supposes you were more likely to be ejected “into production”, that would surely create a tension – a tension that ultimately emerges as a rejection of the indoctrination process thus it becomes a feeling of being out of place that emerges from a condition of indoctrination?

Likewise, there are those for whom  arrival at “the summit” is planned and expected. For this group, certain ideological expectations are placed upon them. They are expected and destined to exist at the summit, to act as “agents of exploitation”, “repression” and “professional ideologists”. Those that reject or do not exhibit the expected behavioural norms of the position, or who do not feel that they measure up to these expectations, are then also subjected to a sense that they are in the wrong place, because they do not feel they can measure up to that standard. Rather than feeling “I do not belong”, there is a sense that they are not fulfilling the expectations of those at “the summit”.

Ultimately, this tension is a desired effect of the educational ISA and ISAs in general. Indeed, this state of tension, of anxiety, the feeling of being an “impostor” is desired because it is a disciplinary technique. So long as people worry about whether they are in the right place or whether they are worrying about the standard/expectations that the educational ISA has inculcated within them, they will not challenge or upset the status quo. A precarious, anxious class is easier to control than one that is confident and assured. They will not challenge the status quo because their concerns are focused on development, on eradicating that feeling of being an “impostor”.

This feeling, as previously stated, affects us all. A feeling of insecurity is necessary, if not vital, to ensure discipline and maintain the status quo. As Richard Seymour puts it:

“For precarity is something that isn’t reserved for a small, specialised group of people – “the precariat” or whoever. It spreads. It affects us all. The whip of insecurity disciplines even those who were recently comfortable.”

The impostor indoctrination affects all of us, it ensures a widespread sense of insecurity in a variety of manifestation, all of which ensure discipline and help to maintain the status quo. Late capitalism has made us all “the precariat”, not just in the sense of creating a sense that our jobs our vulnerable, but also in creating a permanent sense of doubt about our capabilities, about our skills and knowledge. This unease, emerging from the indoctrination process through the educational ISA that either sets up an unobtainable ideal or that creates anxiety in those that have somehow cheated the system, ensures order and equilibrium in the system are maintained.

This creation of anxiety to maintain order has been a strategy throughout the history of capitalism. As Esme Choonara notes in “Is there a precariat?”:

“Over a hundred years ago Karl Marx explained how bosses use the threat of a ‘reserve army’ of unemployed workers to attempt to discipline those in work.”

To maintain order and compliance, one merely needs to create anxiety. Anxious labour is compliant labour. Compliant labour is, in the eyes of the elite, productive labour. Labour that is confident and engaged is ultimately a threat to the established order, because confident labour will seek to influence and challenge the established order. Better to create anxiety and unease than to risk disrupting the status quo which benefits the elite. Throughout history we find examples of regimes that use anxiety and fear to assert their authority and to ensure labour produces that which the leaders require.

This feeling, impostor indoctrination/syndrome however you wish to define it, is not only widespread, it’s also part of a deliberate tactic to ensure that the dominant ideology is not only maintained, but reinforced. Inward looking anxieties ensure control and discipline. If we are concerned about the precarity of our jobs, or focused on concerns around with whether we should be in a certain place, or whether we are measuring up to a standard that has been defined for us, we are distracted from the structures we exist within. For if we do not believe we are where we should be, or that we measure up to some standard, how can we hope to challenge and change the system? We cannot, and that is exactly what the system is designed to do.