The following post was written in collaboration with Andrew Preater.

When considering what is progressive and what is conservative we need to consider our context. We exist in an environment that increasingly focuses on market fundamentalism as the default approach, and assumes markets as the most efficient path to provide solutions, drive progress, and ensure the most equitable outcome for all. Indeed, market fundamentalists argue that where there is a fault, it is due to a failure to make our economic system truly market-oriented. We see this for example in the way the cause of the current economic crisis is presented as rooted in public spending, rather than the failure of free market economics.

For us, this raises a question: what is progressive? Slotting in comfortably with the market consensus, the status quo, or embarking on a path that is visionary and alternative? Surely if we are to ponder what constitutes forward-thinking, we would want to consider alternatives that are original, distinct, and even radical?

The use of language is important. The packaging of certain ideas as “progressive” more easily allow questioning, protesting, or rejection of such ideas to be cast as old-fashioned or even regressive. Alternatives are, by their nature, a block on progress and their proponents unrealistic and outdated – perhaps even luddites selfishly putting their own interest above improvements for their service users. We see this abduction of language played out repeatedly throughout social and political discourse. A particular path – typically one that rejects a sense of ethics – is presented as inevitable, and any opposition can easily be dismissed as the archaic complaints of an isolated and outdated few.

Regarding libraries, a “progressive” approach has increasingly accepted marketised solutions to service provision. As a profession we have broadly accepted the idea of members or users as “customers” or “consumers”, and accepted the need to adopt market strategies to meet their needs. Within the broader context of a societal shift towards neoliberalism, it is hardly surprisingly the societal consensus – the common sense of our time – has been replicated within libraries. This is so accepted that a rejection of this approach, for example rejecting the label of “customer”, has become seen to be old-fashioned and outdated.

This progressive approach to libraries is problematic. It advocates a belief there is a market relationship between the service and the user, with barriers placed between the two, and reduces the relationship between libraries and users to a transactional one with the library supplying information – viewed as a commodity in a market setting. Strategies based on market approaches seek ways to overcome these barriers, to better understand users and research their needs to market the service more effectively and to more efficiently provide commodified information. However, we argue a more radical approach might see library users incorporated into the library service itself in a model of co-creation of service and co-production of knowledge, with librarians challenging dominant, marketised models of service provision. In a model of co-creation or co-ownership users would own the service as much as those running it. This would negate a need to “market” the service or to promote “customer service” as users would already be fully embedded within the service itself.

While not perfect by any means, the approach taken at Mondragon University in Spain offers an example of what can be possible if we re-calibrate the relationship between our services and our users. Rather than making the user distinct from the service, the user (in this case the student) is incorporated into the running of the university. Mondragon realises this through a democratic governance structure with a General Assembly composed of a third staff, a third students, and a third outside interested parties. As David Matthews’ article notes, this Assembly has significant powers from deciding priorities to dismissing senior managers. This is certainly radical in the current climate of higher education in the United Kingdom.

The Mondragon approach is far from ideal. It does, however, point to alternative ways of delivering HE and, potentially, for delivering services to students and our broader publics, and there are lessons we can learn and utilise for delivery of academic and public library services. There is no doubt this sits outside the normative discourse in UK HE. It is, in that sense, a radical and forward-thinking approach in opposition to the conservative marketised approach that dominates.

The problem we face is, increasingly, alternatives to the market-based approach such as that offered at Mondragon, seem so far removed from the dominant ideology as to be almost impossible to imagine within the existing framework. As we have moved further down a consumerist path, the default position of our profession has shifted further towards neoliberalism so alternatives become increasingly seen as too “radical”. Whereas a rejection of a market-based approach was once seen as acceptable, partly due to it being at odds with our professional ethics, such opposition has become seen to act as a barrier or an unnecessary restrainer on progress, and those expressing such moderate views have become irritants that “hold us back”. On the other hand, those enthused by commodification of information and market approaches are motivated and driven to enact changes they feel are necessary.

As once-moderate alternatives are seen as increasingly radical, so that creates a range of problems. Spaces for resistance shrink and the effect is to make a move to an alternative seem so large, that it seems barely possible to realise. Indeed, the effort to engender such change becomes so large as to encourage a sense of hopelessness at the task ahead. This hopelessness itself paralyses opposition to neoliberal approaches and even inhibits engagement with the issues at hand. People feel that the task is so substantial, so difficult, that it is not worth making an effort to challenge the dominant ideology.

This plays out against a backdrop of economic crises and austerity economics that make any form of resistance that much more challenging. For example, in public libraries we see fears that during cuts to public services those who speak against the dominant ideology will be those targeted first as trouble-makers. In higher education we see the use of political policing and other forms of repression of student and trade union protests as a warning not to resist.

The library profession is hampered by a growing apathy at its centre. There is a motivated or ‘activist’ core on both sides, both driven by ideological convictions to realise alternatives in the delivery of services. But there is a disengaged, detached middle who are less motivated. This middle are a powerful weapon for the forces of progression. They can be counted on not to protest or resist because they lack the motivation or will to engage on this level, due either to exhaustion or a more general apathy.

This is not to apportion blame, or pretend we can deliver a radical alternative by being a bit more professionally engaged. Across the board we see a tendency for people to engage less with the forces affecting them, evidenced by declining political party membership and declining trades union and professional organisation membership. Opposition is stymied and alternative paths are inhibited as we lack both spaces and structures within which to organise and the willingness itself to resist.

Herein lies a major challenge for radicals to overcome. The odds are stacked against them both in terms of those driving “progression” and an exhausted or disengaged middle. Disengagement benefits orthodoxy after all, not alternatives: the alternative requires action, progressives merely require a weak, ineffectual alternative to prevail.

We need public discussion about the alternatives because it sparks interest, galvanises those who lean towards a radical alternative, and in doing so, builds momentum for a movement. But in sparking discourse, the radical alternative must capture the language. It has to re-frame the discussion. It has to be made clear that the “progressive” course is not forward-thinking, but rather sits within a conservative viewpoint that accepts the dominant ideology, rather than pushing against it to create something new and alternative. It is not true progression but rather it is drift – in part due to the lack of critical analysis that would accompany serious progression. 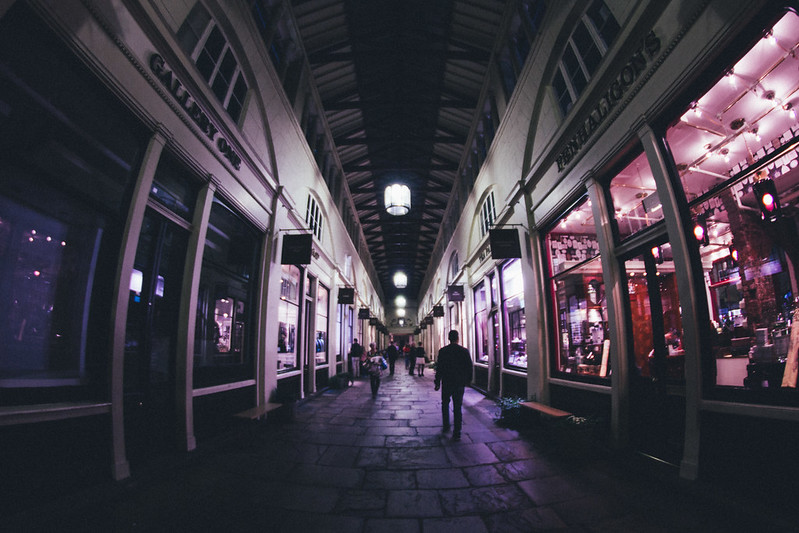 Over the week-end I came across this interesting piece in The Observer on citizenship and how it is being undermined by the rampant consumerism that is characteristic of the times. One particular paragraph stood out amongst all others:

What if we ask ourselves what we might want, need or use in the town centres near us? And then how does the answer differ if we ask as citizens, rather than consumers?

Perhaps the most pertinent bit (from a library perspective) was the following:

The growth in coffee shops is interesting: spaces where people can meet and talk and read.

If retail continues to demand our shopping attention, our councils face a planning challenge for our physical high streets. There is already more retail space than there are retailers, so what do councils do with these spaces? We are struggling even to keep hold of our libraries, that rare enough mainstay of our town centres, yet by this community-centric theory of consumer revolution, they should be more relevant than ever.

Have we missed a trick here? In the rush to embrace the consumerist culture that dominates, in our rush to portray users as ‘customers’ have we missed out on what would truly ensure libraries prosper? Perhaps we have. Perhaps our rush to embrace consumerism has made us blind to what was staring us in the face all along. It is not a consumer culture we should be embracing. We should, instead, be facilitating access to the tools citizens require.