The following article was originally commissioned by the Russian International Affairs Council (original version here, English version here), who have very kindly given me permission to reproduce it here. 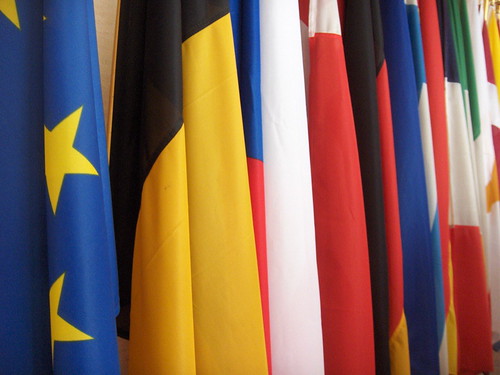 Libraries across Europe are currently facing very serious challenges in the face of the wave of austerity sweeping across the continent. As governments sell to their people the notion that public spending needs to be curtailed to overcome the effects of the 2008 economic crisis, public libraries are increasingly seen as an easy target, one that is unlikely to rally the people in quite the same way as cuts to other services where the outcomes of such cuts appear more immediately tangible.

But libraries continue to play an important role in our communities across Europe. They facilitate access to knowledge free at the point of use in a way that is increasingly threatened as we move towards a word where access to information comes at a price. They are the great leveller in democracies, ensuring everyone has access to the same quality of information. Where, for example, those without internet access (around 30% of the European population do not have a broadband internet connection) still have somewhere to go to ensure they have access to the same information as those that do. This provision is not only important to support children in their education but also the unemployed and those who rely on social security, particularly in the UK where those least likely to have a home internet connection are increasingly being forced to use such technology for their own financial security.

But libraries aren’t simply important in terms of providing access to new technologies, they are also vital for helping to raise literacy standards, and encourage children to develop their reading skills. The importance of libraries to children is perhaps best exemplified by the statistics that demonstrate that children are increasingly using public libraries, despite the internet and the proliferation of a range of competing activities. Over the past eight years in the UK, children’s fiction borrowing as risen year upon year, underlining how important public libraries are for supporting the educational development of the next generation.

In terms of the future for the library service, we are already seeing hints of how it might develop and, perhaps, how it should develop. In the UK, there has been a growth in so-called ‘community libraries’. The terminology appears harmless, but the reality is quite different. In order to support the drive to austerity, libraries are increasingly being forced upon communities who are then compelled to run them against their will. Whilst the majority of library users would prefer their public library to be run by the local authority, policy makers are more interested in reducing costs and passing these costs directly onto the community, effectively increasing their tax burden.

This ‘plague’ is sweeping across the UK and has been noticed elsewhere across Europe. In Spain, for example, volunteer run libraries are increasingly being seen as an option, at least in part due to their ‘commonality’ in the UK. Ideas that spring up in one European nation are sure to be experimented with elsewhere, particularly when it appears that the idea helps to support the austerity agenda that is so prevalent across the continent. It seems not far-fetched to say that volunteer libraries could, over the coming years, spread right across Europe and be seen as a standard way of delivering library services, complemented by large city ‘super-libraries’ such as that that opened in Birmingham in 2013.

If this is to be the future for public libraries across Europe, it is fair to say that the future looks bleak and there is likely to be only a small number of libraries fit for purpose across Europe as smaller libraries disappear and community libraries close due to their unsustainable nature. It would appear that one future is to have a well-funded, flagship library in each major city, but a steady decline in the number of small libraries serving local communities. In the UK alone we could see the number of public libraries shift from the thousands to the hundreds between now and the next century.

Whilst this is how things might develop, it is not necessarily how things should develop. Recent elections have shown just how important the internet has been in influencing the results. President Obama’s election campaign in 2008 showed how the internet could be harnessed to drive a successful presidential election. Not only is it the case that elections have become increasingly fought over the internet, but the battle between political parties has increasingly sought to channel the power of the internet as politicians increasingly see the internet as a vital weapon in the information wars. But this ‘war’ is not only being fought between politicians, there are other actors that influence the political information flow. Websites such as Full Fact, What Do They Know? and They Work For You have provided the tools to make it easier for those with an internet connection to hold their elected representatives to account, as well as to get to the truth about their activities. It is far easier to engage in the political process now than it has ever been. Provided you are connected to the internet.

We know that many people do not have an internet connection. We also know that, as with literacy standards, there is always likely to be a minority of the populace who cannot either access or make use of the information and tools that are at our disposal. We know that despite many years of effort to address literacy standards, there are still many who struggle with literacy (one in six according to the UK’s National Literacy Trust). For those that do struggle, the internet will present additional problems. Issues around literacy do not disappear once you sit in front of a computer. They persist, ensuring that a divide remains between those with good levels of literacy and those without.

So perhaps this points the way to an alternative role for libraries, how things should develop in the next one hundred years. Perhaps libraries should increasingly become gateways to our democracy, helping people to hold their elected officials to account, ensuring that the electorate are well informed and able to influence the political sphere. As well as supporting them through the provision of access to government portals as governments increasingly adopt a ‘digital by default’ strategy, maybe they can also help to ensure the people can watch over the state and ensure it can be held to account. It may require a different model across Europe, one that is more independent of state and therefore at enough of a distance to ensure it can hold governments to account.

Perhaps the volunteer model that is rapidly being adopted is a hint to a better alternative that is being ignored on the basis of political ideology. Rather than ‘community libraries’ run by people with a gun held to their head, maybe a closer, stronger partnership between the community and the professionally delivered service is the answer. Maybe the example of the University of Mondragon suggests an interesting, more desirable alternative.

Mondragon operates on a co-operative model that is highly de-centralised and engages all partners in the delivery of education. It also has a highly democratic governance structure:

Its supreme body is the general assembly, a 30-strong committee of representatives composed of one-third staff, one-third students and one-third outside interested parties, often other co-ops in Mondragon Corporation. It meets annually to decide on the priorities for the coming year and has significant powers: it can, for example, sack members of the senior management team.

Perhaps this is a model that libraries across Europe should be exploring. A professionally delivered service run in partnership with its users and other co-operative libraries. The potential for such a service is great, but the idea itself could be easily corrupted. Efforts to expand on mutuals in the UK have already raised alarm amongst interested parties such as Co-operatives UK and the Trades Union Congress. As such, this alternative future should perhaps be handled with care and one that advocates should be careful to ensure the idea is not corrupted and abused.

There is certainly the potential to build an alternative future for public (and, indeed, academic) libraries in the future. At present the future appears to be developing in a way that will result in the slow destruction of a public library network across Europe. But it doesn’t have to be this way. Libraries should develop as institutions that can help the people of Europe engage in democratic processes, they should be at the centre of a drive towards transparency across the continent. A well-funded and well-resourced library service should enhance democracies throughout Europe. The future might look bleak, but it should look transparent.