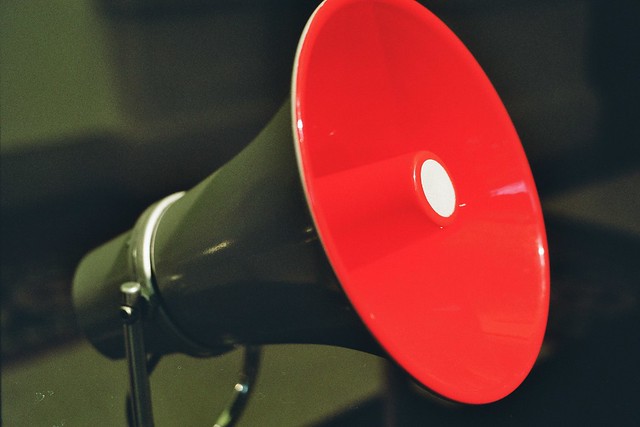 We need to speak out as a profession against mass surveillance. Image c/o floeschie on Flickr.

Ever since the disclosures by Edward Snowden in 2013, I’ve been concerned about the impact of mass surveillance both on our society, and on us as professionals. Disappointingly, there seemed to be little in the way of action by the profession (particularly in the UK – hampered by a professional body that cannot be overtly political), until the Library Freedom Project came along and started making waves in the United States. Inspired by Alison Macrina’s work, I started to consider more deeply the impact of mass surveillance on our communities and the various issues it raised. For me, alongside concerns about intellectual privacy, it highlighted a further aspect of the digital divide: autonomy of internet use. Given the limited amount of literature on the relationship between the digital divide and surveillance, I decided this was an important area to explore more extensively. So, I started reading around and pulling together an extended piece for the Journal of Radical Librarianship on the topic.

The main inspiration for the piece was the article Intellectual Privacy by Neil Richards (which is available OA here and is highly recommended). For me this really crystallised some of the key issues around surveillance and the protection of intellectual privacy (the ability to read, communicate and seek out information without being observed doing so). Aside from the very crucial focus on intellectual privacy and its importance, Richards also highlighted the role of librarians in supposedly developing some of the “norms” of the concept itself. This role seems particularly strong in the United States (where Richards drew most of his examples), with even the ALA taking a role in advocating for the intellectual privacy of individuals through a variety of initiatives.

As well as Richards’ works, David Lyon also played a key role in forming my views. Lyon is a leading figure in surveillance studies and has written a number of invaluable pieces on the topic that, as with Richards, helped to clarify my thinking (see, for example, his paper on understanding surveillance today). For example, Lyon’s definition of surveillance was particularly useful in understanding how surveillance operates upon individuals. For Lyon, surveillance is about the “focused, systematic and routine attention to personal details for purposes of influence, management, protection or direction”. It’s interesting (yet unsurprising in some respects) the extent to which surveillance within the UK is seen as primarily about protection, with little consideration with regards to how mass surveillance controls or “manages” individuals (or maybe we just don’t care that it controls us). What I also found particularly useful here is that Lyon’s definition doesn’t solely apply to the mass data collection by the state, it also relates to that growing phenomenon: corporate surveillance.

Clearly, there is a conflict between intellectual privacy and mass surveillance. If you exist in the conditions of the latter then you clearly cannot have the former. For society it presents a serious issue – for librarians it presents a critical issue that gets to the core of our professional ethics. If we cannot (or do not) protect the intellectual privacy of our users, then we are failing as professionals. Indeed, given we exist in a state of mass de-professionalisation, where volunteers are seen as adequate replacements for “expensive professionals”, we are rather making the case for our own extinction. If we do not have a set of ethics and professional values that we not only espouse but actively promote, what makes us any better than a volunteer?

In terms of the profession in general, there are clear guidelines from organisations representing our profession regarding the conflict between mass surveillance and our ethics. In 2005, for example, the Chartered Institute for Library and Information Professionals (CILIP) produced a “Statement on intellectual freedom, access to information and censorship” and endorsed the Council of Europe’s ‘Public access to and freedom of expression in networked information: Guidelines for a European cultural policy’. The Council of Europe’s guidelines clearly stated that individuals are to “decide for themselves what they should, or should not, access” and that those providing the service should “respect the privacy of users and treat knowledge of what they have accessed or wish to access as confidential”. Furthermore, the International Federation of Library Associations and Institutions (IFLA) advised in their ‘Statement on Privacy in the Library Environment’ that information professionals have a responsibility to “reject electronic surveillance”, provide training on “tools to use to protect their privacy” and “respect and advance privacy at the level of practices and as a principle”. The message is clear, we have an obligation to ensure the privacy of our users and to provide them with the tools necessary to enable them to ensure the can defend their intellectual privacy.

This task is made even more urgent given the nature of the digital divide. We know well enough that access isn’t merely enough, but that individuals also require the skills with which to exploit the internet to their own advantage. In a report published in 2014, the BBC found that 1 in 5 adults lacked the four basic skills (send and receive emails, use a search engine, browse the internet, and fill out an online application form). Given that the most disadvantaged are most likely to be affected by mass surveillance it’s clear there is a need to provide the necessary support to ensure that everyone is able to ensure their intellectual privacy, not merely those with the means by which to do so. What is clear, post-Snowden is that the digital divide is as much about the gap between those who can protect their intellectual privacy and those who cannot, as it is about having the skills to be able to use the internet to benefit individuals economically, educationally and in terms of healthcare.

We, as a profession, have a clear commitment to tackle the digital divide. We play a crucial role in levelling the playing field, ensuring both access to the internet and support as individuals seek to exploit it to their own advantage. This crucial role is, of course, being undermined by the delivery of such support by the private sector, in particular banks (see Barclays Digital Eagles). Of course, corporations have no interest in ensuring privacy of the individual online, because greater privacy results in the exposure of less personal data which large corporations can exploit to drive profit. We, as a profession, are not beholden to share-holders. We have no reason to expose our users’ personal data for exploitation. We have ethical obligations not to expose the reading habits of our users. It is this that distinguishes us from banks and from volunteer run libraries.

It is, therefore, incumbent on us as library and information professionals to develop our skills with regards to online intellectual privacy, to seek to defend the intellectual privacy of our users and, more broadly, to speak out against government legislation that attacks our professional values as well as posing a threat to society in general. We have an obligation as professionals to defend intellectual privacy and to ensure that it is not only a value afforded to those endowed with social, cultural and economic capital, but also to the most disadvantaged and vulnerable in our communities. If we are serious about tackling the digital divide in all its manifestations, then we need to be serious about ensuring autonomy of use for all. So long as our communities are vulnerable to mass surveillance we will not achieve true equality of access to the internet and the wealth of information it provides. That is why we must act.

Clark, I. (2016). The digital divide in the post-Snowden era. Journal of Radical Librarianship, 2, 1-32. Retrieved from https://journal.radicallibrarianship.org/index.php/journal/article/view/12/24