Just before Christmas I wrote a post questioning why Barclays are in our libraries. Somewhat alarmed by the invasion of a public space by a corporate entity, I was particularly concerned about the kinds of tools that they recommend as part of their digital skills drive. Unsurprisingly, they were things like Google, Yahoo! and Outlook (see the aforementioned post for reasons why I find this problematic). The Google thing particularly troubled me, and it rather suggested that (surprise, surprise) there may well be an ulterior motive as to why Barclays are offering up their help in public libraries.

In Nick Stopforth’s post on the Libraries Taskforce blog, he argues that:

Barclays are not promoting their banking services in doing this, they are solely concerned with helping people develop their digital skills and get online. I don’t buy this. In fact, I have never bought this. As my grandfather (an Arkwright style shopkeeper who would be appalled his grandson has turned out to be a socialist) used to say “nothing is free”. Barclays aren’t offering this for free with no immediate return. They are doing it because there is a business advantage in them doing so. I think Nick’s statement may well be wrong and that there is a soft sell element to this. I’m a suspicious sort, so I thought I’d dig around a bit and see what I can find out.

As part of something else I am working on at the moment (which seems to be never quite achieving closure), I had been digging around finding out more about how Google Ads works. Here’s what it says on their Gmail help page:

We are always looking for more ways to deliver to you the most useful and relevant ads – for example, we may use your Google search queries and clicks, Google Profile, and other Google Account information to show you more relevant ads in Gmail.

In light of the fact that Barclays recommends Google as a search engine and email provider, this seemed to me to be quite intriguing. If Barclays are setting people up with Google accounts in libraries then at any point during the session taking them to the Barclays site (say, maybe to point them to their Internet Help pages as reference points after the session), there is a very high chance that Barclays adverts will be delivered to that user’s inbox. So I thought I’d ask them directly if this is what they do. And lo: 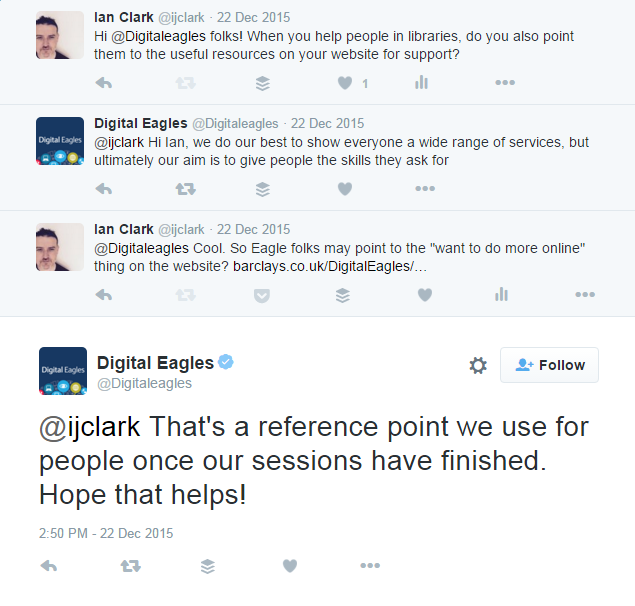 Now, of course, this is fairly circumstantial. Maybe the Digital Eagles don’t always sign people up for Google Accounts and maybe they don’t always direct people to their website. I’ve never been to one of their sessions, I’m not aware of anyone who has and there seems to be very little information on exactly what they do in these sessions available to the general public. BUT signing them up for a Google account, and visiting the Barclays Internet Help pages in the same session will significantly increase the chances of the individual in question receiving targeted ads in their inbox promoting various services Barclays delivers. In short then, Digital Eagles in libraries is a great opportunity for the bank to deliver direct advertising to individuals who are not currently online, who lack digital skills and, potentially, are not existing customers of Barclays (their Internet Help page also promotes their online banking services). I’m sure this is not their sole reason for providing digital skills support, and it might be that this is entirely coincidental. But it is worrying (indeed, I was telling a more politically centrist IT friend of mine about the project and his instant reaction was “that’s completely inappropriate”).

The best alternative (aside from not letting Barclays in the building at all) would be for the tools that they recommend to people were privacy related rather than the kind of tools that gather data to serve adverts. So, for example, rather than Google’s search engine, they have to show individuals how to use DuckDuckGo. This would ensure that the user’s search history is not then used to deliver adverts and would ensure that there was no potential whatsoever for Barclays to either hard sell or soft sell their products. At present this relationship provides far too much opportunity for the latter, even if the former is prohibited.

I think we’ve generally done ourselves (the profession as a whole) a huge disservice when it comes to digital skills support. We KNOW this stuff. We know this stuff BETTER than Barclays do. Right across the profession we’ve got people who help people with digital skills, who teach people essential skills with regards to digital literacy, and yet we’ve outsourced these services to banks. Which when we read that back, doesn’t that sound odd? The skills and knowledge we have around using the internet effectively we are not passing onto the general public, we are asking providers of financial services to do it for us. How did we get into this mess? Is it a question of leadership? Is it the hollowing out of public services by central government? Is it the decline in professional ethics? For me it’s all these things and more. One thing is for certain, the future is bleak if we continue to believe that others can do it better than us.