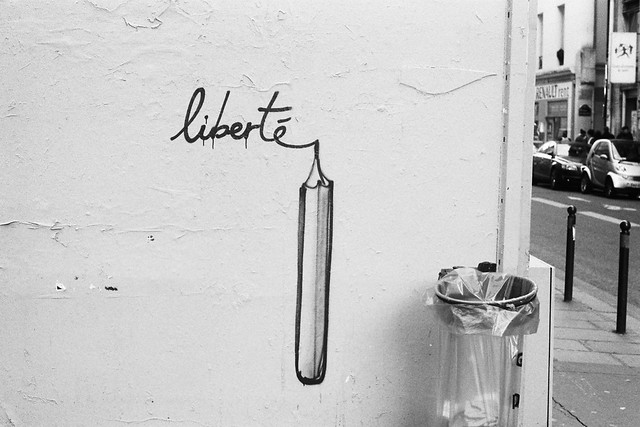 The internet has brought new threats to intellectual freedoms…what can librarians do? (Image c/o Amélien Bayle.

For some time now I’ve followed (and admired greatly) the work of Alison Macrina and the Library Freedom Project (LFP) in the United States. Teaching citizens how to protect themselves from surveillance (both state and corporate) seems to me to be a fundamental role for librarians in a digital information society. Indeed, the International Federation of Library Associations and Institutions’ (IFLA) internet manifesto clearly states:

“Library and information services…have a responsibility to…strive to ensure the privacy of their users, and that the resources and services that they use remain confidential.”

In a post-Snowden world where state and corporate surveillance has merged as the internet has expanded, the principles of protecting privacy and ensuring intellectual freedom are more vital than ever.

Alison’s work has been particularly inspiring from afar due to the inherent difficulties of being able to deliver anything equivalent in UK public libraries. Whilst conducting the kind of work she does in the US is not without its hurdles, I tend to feel that the prospect of even offering the kind of support she provides would be impossible with our library and professional structures. I find it hard to conceive of a local authority permitting any kind of service that teaches citizens how to protect themselves online. Whilst libraries themselves are presented as “neutral” (despite the reality), they are delivered and sustained by political entities. Not only are they sustained by political entities, they are sustained by political entities that are broadly supportive of both the need for surveillance in the traditional sense (ie state) but also, due to the infection of neoliberal dogma, accepting of corporate data collection (corporate surveillance). In fact, considering recent developments, it would appear they are rather keen on using libraries as a mechanism to increase susceptibility to corporate data collection.

The recent announcement of a partnership between BT and Barclays in public libraries demonstrates how far we are from being able to provide the kind of training that Alison can provide in the United States. Presented as a crucial weapon in the bid to close the digital divide, the government announced a pilot project whereby BT provide wifi in public libraries and Barclays, through their Digital Eagles scheme, provides “free technology advice”. Putting aside the very obvious concerns about private influence in a public service, it’s pretty clear that a scheme funded by Barclays will work in the interests of Barclays (and by extension, corporate interests in general). It goes without saying that the kind of training the Digital Eagles provides does nothing to protect the privacy of internet users. A flick through their various guides finds advocacy of Google and Yahoo! as “very reliable and easy to use” and the guide to online safety only provides the most basic of advice. If you want to learn about protecting yourself from corporate surveillance, surprise, surprise, a large bank is probably not going to offer a solution.

That’s how far away we are, in one of the most surveilled countries in the world, from being able to provide citizens with protection from state-corporate surveillance infrastructures. Rather than protecting people from such surveillance, we are partnering up with private companies who seek to benefit from the data collection opportunities the internet provides. We’re not so much protecting citizens from data collection, but encouraging greater data collection.

Of course, efforts by the LFP have not been without their own difficulties. Yesterday it emerged that the Department for Homeland Security contacted the police department in Lebanon, New Hampshire regarding Kilton Public Library becoming the first library in the country to become part of the anonymous Web surfing service Tor. Using the standard of trope that surveillance avoidance puts people in danger, the police applied pressure to ensure that the library pulled the plug on the project.

The ability to source and access information without restriction should be a core function of libraries. In a world of mass surveillance, a “chilling effect” inhibits our right to obtain information without fear. Tools such as Tor provide us with that freedom to seek out information without fear of state or corporate surveillance. This is a fundamental core concern of the librarianship profession, and it’s one that I think we have been slow (generally speaking) to address. Whether it be for fear of reprisals or lack of the requisite knowledge to provide this kind of support. The move by the Department for Homeland Security must be a concern for all of us, whether we reside in the US or not. If attempts to deliver projects that protect citizens from mass surveillance are shut down before they even get off the ground in the US, we can be assured that even attempting an equivalent in the UK would be impossible to get off the ground.

Ultimately, we are being pushed into a position that compromises the ethical underpinning of our profession. We know that seeking and obtaining information freely online is compromised due to a combination of state and corporate surveillance, and yet any attempt to protect our users to enable free and uninhibited access is shut down. So where do we go from here? Private tuition outside the confines of local government influence? Who knows. In the meantime, it’s vital to put pressure on the U.S. Department of Homeland Security and the local police department and assert that an attack on intellectual freedom in libraries should not be tolerated under any circumstances, not least on spurious grounds of security.

You can add your support here. Regardless of whether you are a US citizen or not, I’d urge you to sign. Intellectual freedom gets to the heart of our profession. When it is attacked, we are attacked.