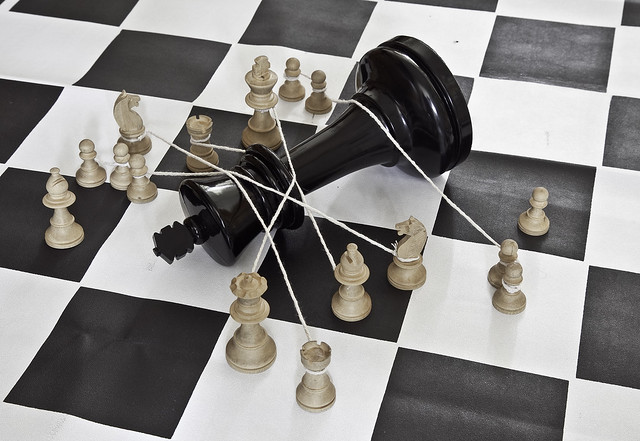 A few years back, I wrote about the need to capture the narrative when it comes to public libraries. In the face of the challenges put before public libraries and librarians, it was clear that a change was needed. Librarians needed to seize the narrative and make it their own. However, I do not think I went nearly far enough.

There has been a growing trend in the past couple of years to use the language of radicalism and revolution in librarianship. I’m obviously a part of that having got involved in a group of self-identifying radical librarians. However, I would contend that most of the rhetoric has been misused and is, potentially, damaging because it presents a solution that doesn’t really exist.

The problem with much of the rhetoric is that it takes a somewhat liberal left position. Not a surprise in a profession that is dominated by those that sit on the liberal left of the political spectrum.  Those appropriating the language of radicalism and revolution contend that the system itself is not at fault, we have just failed to fully exploit the opportunities that it presents for us. There are two levels on which I find this train of thought problematic.

First, it implies that it is our fault. That if only we communicated our value better, we would thrive and prosper. The failure to take advantage of the opportunities presented to us is down to a lack of imagination on our part. If we came up with better strategies to communicate the value of libraries, we would find ourselves in a much better position. I don’t know about you, but I don’t like the implication it is my fault, rather than the system. I’m not enamoured with the notion that I actually need to embrace the system to ensure a better environment for libraries and the profession.

Second, it implies that the current system is fine. That the neoliberal environment in which we exist is a good model. That we don’t need to change an inequitable economic system that sits at odds with our ethics and values. For how can a system that embraces profit over public good sit comfortably with a profession that fundamentally believes in free access to information? A profession that embraces the notion that all should have equal access, regardless of financial circumstance? The underlying message is clear: don’t rock the boat, you don’t really need to.

It is, without doubt, hugely naive to believe that if we just communicated better, the political elite would cast aside their deeply engrained political ideology and embrace the idea of the commons. This is a fairly standard position taken by the liberal left: the system is fine, let’s make the most of it. Such a position is understandable, the easy option is often the more attractive. The alternative is hard work, exhausting, unrewarding and will not be achieved in our lifetimes. Better to just accept the system and make the best of it.

Except that is exactly the position that plays into the hands of those that wield power. If we accept that the system is fine, doesn’t need changing and that we only need to take better advantage of the opportunities it affords, then we can be pushed a little further. Step by step those in power can push us into accepting the need for the system to expand. We may grumble but, ultimately, we will accept and work within the structures because we believe that we can make the best of it.

Better communication and better advocacy won’t save the day. They might make us feel better (in contrast to the alternative, they take little effort), but they will achieve nothing of any substance. Politicians will not be convinced by great advocacy because they have fully embraced an economic train of thought that rejects the belief in the public good in favour of private ownership and profit. Those schooled in the economics of Friedman and the ‘philosophy’ of Rand (such as it can be described as a philosophy), will not be convinced by some imaginative advocacy/communication/marketing. A lifetime of propaganda is harder than that to dislodge.

We need to stop ploughing the same liberal left, anti-intellectual furrow. It does not matter how well we communicate, how much better we advocate for public libraries, they will not reverse an overall political agenda that touches every aspect of public life on the basis of some great advocacy for libraries. Because the ideology that drives our politicians is not restricted to libraries, but applies to all public services. It is not that they can be persuaded by great library advocacy alone that they will retreat from a broader political belief that there is no such thing as a public good. That may have been true 10 or 20 years ago, it’s not true now. What needs changing is not the narrative about libraries, but the broader economic narrative. Until that is effectively challenged, advocacy will remain a blunt tool that makes us feel good, but achieves very little of substance, no matter to what extent we wrap it up in the flag of “radical revolution”. Ultimately, advocacy is a tool of conservatism, not of revolution.