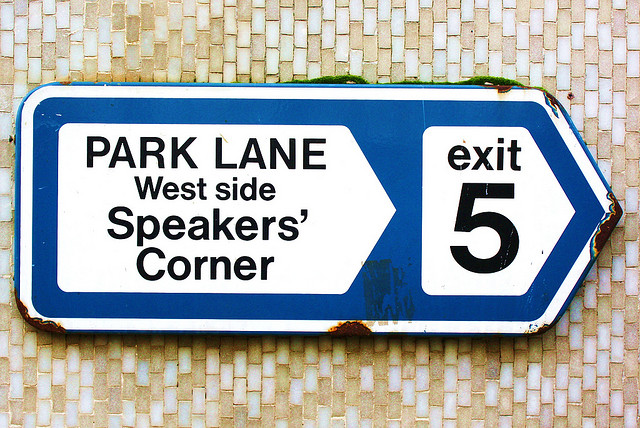 There has been a growing trend in recent years to argue that there is effectively a “right to offend”, that people do not have a right to take offence.  But is there a “right to offend”? It certainly seems that an increasing number of people believe that there is such a thing (this often comes mixed in with arguments over the right to free speech), from Cristina Odone to David Cameron to Stephen Fry to Ricky Gervais. Confounding what one might reasonably expect, this notion of the “right to cause offence” has embedded itself across the political spectrum. Everyone from the liberal left to the far-right have pushed the line that no-one has the “right to be offended”, based on the notion that people choose to be offended by speech and can choose not to expose themselves to hateful messages and harmful language if they don’t want to see it. As far as the defenders of this so-called “right” are concerned, words are incapable of causing actual harm and therefore any sense of “offence” is meaningless. Of course, this train of thought relies on the belief that words are devoid of any social, cultural or historical context and merely exist in isolation. Which, of course, they do not.

The right to offend

We’ve seen the rise in this “right to offend” mentality in light of the attack on the “satirical” magazine Charlie Hebdo. Here, again, the argument that we should be able to offend whoever we want emerges. It is, so the proponents argue, the right of the cartoonists to insult Muslims, whether they are rich or poor, in positions of power or the disenfranchised. Unlike good satire (which should always punch up not down), broad brush cartoons attacking Muslims are indiscriminate. They do not distinguish between those in power and those without.

When it comes to free speech, we have already accepted as a society that this is not an absolute right. There are limits enshrined in law (although there are those who argue that these limits should not apply). Freedoms have to be balanced, we cannot argue that all rights are absolute, as there are times when these freedoms come into conflict. For example, the right to be able to live in a safe environment and not feel threatened by others, surely trumps the right to free speech (particularly when it comes to racism, sexism, ableism, homophobia etc). Not for nothing did the German constitution of 1949 stipulate that:

“Human dignity shall be inviolable. To respect and protect it shall be the duty of all state authority.”

We all have a right to live with dignity, to live free from the threatening and abusive conduct of others.

In 2005 Le Monde was found guilty of “racist defamation” against Israel and the Jewish people. In 2008 a cartoonist at Charlie Hebdo was fired after refusing to apologise for making antisemitic remarks in a column. And two years before the Danish paper Jyllands-Posten published the cartoons of Muhammad in 2006, it rejected ones offering a light-hearted take on the resurrection of Christ for fear they would “provoke an outcry”.

Far from being “sacred”, as some have claimed, freedom of speech is always contingent. All societies draw lines, that are ill-defined, constantly shifting and continually debated, about what constitutes acceptable standards of public discourse when it comes to cultural, racial and religious sensitivities. The question is whether those lines count for Muslims too.

Indeed, France has been struggling with this in the light of the terrorist attacks, arresting those who have made distasteful “jokes” seen to be in support of those responsible for the series of murders that rocked the country.

We have, as a society, broadly accepted that there is a right to be offended (albeit in very particular terms ie hate speech). It’s no real surprise to find that the vast majority of those who defend the “right to offend” are white, middle class males. These individuals cannot be “offended” because their culture is not under threat they are the ones who, after all, wield the power in our society. When you have power, what is there to be offended by?

Although I am a (fairly militant) atheist, I tend to see that there is a significant difference between criticising a religion such as Islam and Christianity in the West. We often hear that Christianity is an easy target – we’re all happy to laugh at Christianity, but wouldn’t dream of doing so with regard to Islam. There is, of course, a substantial difference between the two. We live in a country built on Christian beliefs, on Christian traditions. I grew up in a Christian country. A country where Christianity wields power that other religions do not – 26 bishops sit in the House of Lords and can make or break government legislation. No other religious group has such representation at the seat of power.

We do not have a “right” to mock Christianity per se, but mockery in the face of a force that wields power is reasonable, particularly as it is the dominant religious identity. Islam, on the other hand, is not. It is not part of my cultural heritage and is certainly not accepted as part of our supposed “shared cultural identity”. I have no connection to it. It is something ‘other’. It is not my place to lampoon it because it is not my culture to lampoon. I have no understanding of Islam and its tenets (even if I did, I would still feel uncomfortable exclusively ridiculing a religion that is not part of my cultural heritage). However, I do have ample understanding of Christianity. Mocking Islam as someone brought up in a Western Christian cultural environment makes me feel very uncomfortable. I would not mock other aspects of others’ cultural heritage or identity so why should I mock their beliefs, no matter how irrational they appear to be?

Meanwhile, whilst the best efforts have been made to ensure our eyes are diverted towards the many millions of people who had nothing to do with the attack (apart from suffering from the attackers’ lie that they are one of them), the real satire has been gradually unfolding. We’ve been subjected to passionate pontifications about the importance of the freedom of the press, pontifications that ring more than a little hollow when placed in their proper context. As is typical of those in power in desperate need of some good PR, leaders with a questionable commitment to human rights have used the murderers of the Charlie Hebdo cartoonists to assert commitments to free speech and a free press. Not only are our leaders engaging in such stunning cynicism, but prominent voices in the media (ironically) have also been keen to jump on Islam and assert the importance of a free press.

Take Douglas Murray for example. Associate Director of the Henry Jackson Society and media spokesperson for the neoliberal far-right. Whilst he laments the state of the free press with regard to its collective failure in the UK to reprint the cartoons that supposedly led to the deaths of 12 individuals, he has not always been the greatest defender of a free press when it comes to confronting the danger of an over-powerful state. A free press when it comes to attacking those least likely to do us harm, versus that of a state that can exert its power over us at will.

Then there are the numerous leaders who announced that they were “Charlie Hebdo” on the streets of Paris. How hollow their words sounded when they are guilty of repressing the free press within their own states. And this hypocrisy didn’t just afflict those from countries in the Middle East and beyond. Indeed, no sooner had David Cameron announced to the world “je suis Charlie”, than he was back home announcing his (laughably idiotic) intentions to ensure that no-one can ever have a private conversation ever again.

A free press should only be defended, it appears, if it is sticking the knife into a minority group rather than those occupying the seats of power. Yes, this is the kind of free speech that must, apparently, be defended – the kind that punches down rather than punches up.

What we should be watching is not the many millions of Muslims throughout the world who merely wish to practice their religion in peace (no matter what we may feel about religion in general) but, as any good satirist would tell you, it’s the state. The powerful. We should be looking up, not looking down. For whilst the state wants us to focus on millions of people who have nothing to do with the atrocities supposedly carried out in their name, they will use this opportunity to remove the freedoms they claim bind us together as part of some notion of shared values. It happens time after time (even to those who are supposed to be watching the state closer than most). They preach solidarity with us, but the reality is that the state is often the enemy of the people and we should never allow their games of distraction to permit us to forget this.