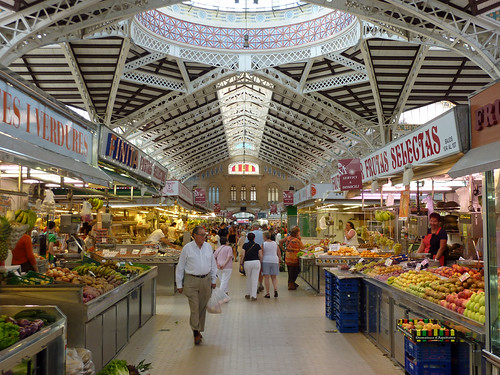 The central market in Valencia, Spain.

One of the trends in library rhetoric is the increasing use of neoliberal words and terminology. This has been ongoing for some time and, in many ways, is nothing new (indeed, the discussion about it is nothing new). However, it seems to me to be ever more prevalent as growing numbers of people talk about library services (and public services in general) in broadly capitalist terms. We see this through the growth of the use of terms such as ‘customer’, ‘marketing’ and, most recently, in the suggestion that libraries should adopt a ‘market orientation’.

Language is probably not given the importance it deserves. Care needs to be taken with the words we use and how we use them. Words have meaning, but they also come with baggage. It can help engender cultural change within an institution, changing the collective mindset and corrupting the values of an institution.  There are increasing efforts, some might argue, to “roll-out neoliberal logics” within institutions and language is a powerful tool in paving the way for these “logics” to take hold.

But what of neoliberalism? Why should we be concerned about language reflecting neoliberal ideals? Self (Rolling Back the Market: Economic Dogma and Political Choice, 1999) argued that neoliberalism consists of five main dogmas:

Neoliberalism argues that public services are inefficient unless they adopt market strategies to deliver services. Public services should, in effect, adopt a ‘market orientation’. It is by adopting such a strategy that, according to neoliberal dogma, public services will thrive. Not only should we be wary of the strategy, we should also be wary of the terminology that enables it.

Concern about the use and meaning of language is undoubtedly unfashionable. To value language and its meaning is to be too old-fashioned, to hold back progress or to be an infuriating block on progress.  This is a typical characteristic of neoliberal debate – to present the argument as being between two opposing and simple perspectives:

Such a strategy is well established by neoliberals: neoliberal ideas are painted as progressive, forward-thinking and exciting. Opposition to such ideals (and there will be opposition when espousing neoliberal ideals that are odds with the values of the majority) is somehow a block on progress and somewhat old-fashioned. These old-fashioned perspectives, underpinned by a fear of change, prevent us from making progress. It’s not just about the way they use language, it’s about the way in which they frame the debate.

Language is repeatedly abused by neoliberals to further their goal of turning us from citizens to consumers [pdf]. Our language has become increasingly capitalist, which is perhaps unsurprising when one also considers that we are increasingly living in conditions that could be best described as ‘extreme capitalism’. One does not necessarily cause the other, but it cannot be mere coincidence that our language is increasingly utilised in capitalist terms. Does the shift in language facilitate the growth of the capitalist system, or does the expanding capitalist system influence our language? Is language, in fact, the weapon that enables the rollout of “neoliberal logics”?

In 1961, Raymond Williams pondered the term ‘consumers’ and wondered if we were seen as ‘users’ instead of ‘consumers’:

“…we might look at society very differently, for the concept of use involves general human judgments – we need to know how to use things and what we are using them for… whereas consumption, with its crude hand-to-mouth patterns, tends to cancel these questions, replacing them by the stimulated and controlled absorption of the products of an external and autonomous system”.

Perhaps the changing of our language influences the way we view our society and how it might develop. Maybe using ‘consumers’ (or ‘customers’) instead of ‘users’ sows the seeds of a particular mindset. A mindset that sees society as one filled with consumers rather than citizens, one that enables the establishment of these “neoliberal logics” within institutions.

It is primarily due to concerns about the extent to which language enables the expansion of “neoliberal logics” that I am weary of its growing (mis-)use in libraries. I’m not comfortable with talk about ‘market orientation’ (or ‘marketing’ if I am entirely honest) with respect to public services in general, let alone with specific reference to libraries. Libraries do not exist in a market (although it could be argued that HE libraries operate increasingly within a market environment). Talk of “market orientation” in terms of a public service is, for me, deeply troubling (and I come from the retail sector where such language is obviously deepy ingrained). Not least because one has to question when a market based solution has ever worked for any public institution (clue: never). But also because of what the word actually means.

Of a manufacturer, advertiser, etc.: to place or establish (a product) on the market; esp. to seek to increase sales of (a product) by means of distribution and promotion strategies. Also (in extended use): to promote the public image of (a person, organization, etc.).

The action or business of bringing or sending a product or commodity to market; (now chiefly, Business) the action, business, or process of promoting and selling a product, etc., including market research, advertising, and distribution.

Using the terminology of the market simply validates it and encourages its spread, enabling the “neoliberal logic” to take hold. By adopting capitalist language we accept that information is a commodity (a product) that can be promoted and sold (marketed) – in essence “neoliberal logics”. If we accept the logic, do we then accept that our services should be re-designed according to market methods and incentives?

Is it appropriate to frame information as a commodity? And, if it is, how do we square this with our professional ethics? Commodities have prices, it therefore follows that if we treat information as a commodity we accept that it has a price. But if we are concerned with facilitating free access to information, isn’t there a conflict? In a neoliberal, extreme capitalist state the answer is, of course, that there is and that, therefore, the conflict must be resolved in favour of the market (the market trumps all in an extreme capitalist society). We then become marketers and sellers of a product, rather than facilitators of access to a social good. The roll-out of “neoliberal logics” would be complete.

The problem for me is exacerbated by how such terminology is couched. If you oppose such language (as I mentioned above) you are seen as obstructive block to progress, an out of date annoyance. This is how the discussion is often framed: accept market terminology or face marginalisation. The truth is, however, that that particular side of the argument is actually deeply conservative and is, in many respects, the real block on progress. After all, how progressive is it to adopt the terminology and strategies that constitute much of the frameworks of our capitalist society? Surely to reject capitalist norms is to be progressive and forward-thinking? Is a fascination with ‘market orientation’ the actual block on progress? Shouldn’t resistance to “neoliberal logics” be respected in a professional context, rather than rejected out of hand as obstructive? Such resistance is, after all, entirely in tune with our professional ethics.

The adoption of capitalist language and strategies lacks imagination. It’s easy to reach for a solution readily available from there, even when such solutions have had limited success over there.  It seems much harder to come up with a strategy that is substantially different. It takes time and effort to construct something new. We can do much better, we can construct something imaginative and distinct. We do not have to adopt capitalist, neoliberal norms because that’s the path others have followed. We have the skills and the capabilities. It’s no good being fearful and negative, believing that we can do no better than what is done there. We have to believe that we can construct something better.

And this is where the debate often leaves me filled with despair – it prevents us from constructing something new, from using our imagination to construct something better. If you dare to criticise the rollout of “neoliberal logics”, your argument is nullified at source, prevented from being explored in any meaningful sense. There are alternatives, there should not be one dominant voice in the debate, all avenues should be explored and critiques should be a launching pad for further discussion not seen as a threat. However, neoliberals and arch-capitalists frequently frame the debate in such terms so as to close down the opportunity to explore alternatives – leaving us in the state we are in now where we have seen continual ‘progress’ towards an extremist capitalist state.

It doesn’t have to be this way. We do not have to be fearful of the alternatives. We do not have to accept that by rejecting capitalist rhetoric we are, in some way, holding back progress. We do not need to enable “neoliberal logics” to take hold within our services. Fear may prevent us from taking action, from challenging existing norms to create something distinct. But we shouldn’t be fearful of rejecting these norms and creating something new. We have it within ourselves to build an alternative, we just need to be fearless, collaborative and patient.