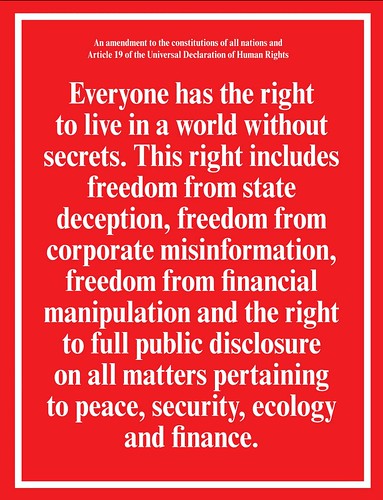 “An amendment to the constitutions of all nations and Article 19 of the Universal Declaration of Human Rights.” Proposed by Adbusters. (Image used with permission from Adbusters.)

A little while back I wrote a post pondering whether the internet has, in terms of the way we are governed, been an opportunity missed. For me, the arrival of the internet had the potential to revolutionise our political life. In democracies it offered the opportunity to more closely connect the governed with the governing and in totalitarian regimes it offered the opportunity to breakdown barriers and help to shape a society that is more open and democratic. Whilst the internet has helped facilitate communication between citizens, and led to a degree of change in the way we are governed, the changes have, as has been the case throughout history, benefited the powerful rather than the powerless.

The internet has, undoubtedly, led to a change in the way in which we communicate with each other. We share far more with complete strangers than we would ever have been comfortable with in the past. In many respects, this is relatively harmless. We choose to volunteer certain information about what we are reading, what we are eating, where we are going…harmless information of little interest to anyone.

But, as the NSA revelations have demonstrated, information has also been collected by the state, information that was not publicly published by citizens and instead obtained by tapping into cloud networks. As the Washington Post reported:

…the NSA’s acquisitions directorate sends millions of records every day from internal Yahoo and Google networks to data warehouses at the agency’s headquarters at Fort Meade, Md. In the preceding 30 days, the report said, field collectors had processed and sent back 181,280,466 new records — including “metadata,” which would indicate who sent or received e-mails and when, as well as content such as text, audio and video.

In short, communication between ourselves has changed, as has the amount of information on us available to the state, but the relationship between the governed and the governing has remained fundamentally unchanged.

It would seem hard to believe that the revelations by Edward Snowden are going to repeated any time soon. Fine words will be said in public, but it seems unlikely that the reaction will be anything other than the tightening of internal procedures to ensure that another Snowden is not on the cards in the future. History suggests that the response will not be to increase transparency, but to tighten the grip on state information, ensuring nothing leaks out that might alarm the governed. Indeed, the fact that both Snowden and The Guardian are faced with calls to be prosecuted suggests that the governing are unlikely to suddenly open up and embrace transparent governance.

On a smaller scale, it is also the case in the UK that the right of the governed to know what the governing are doing is threatened with restriction. The UK has often been seen as one of the most secretive of the Western democracies, certainly more guarded of its internal operations than the United States (whose Freedom of Information Act preceded the UK’s by 35 years).  Whilst the introduction of the Freedom of Information Act in 2001 offered hope that perhaps we were entering a new era of transparent governance, Tony Blair’s regret at introducing it underlines the extent to which it has been introduced with great reluctance and, consequently, there have been frequent and sustained attempts to undermine the legislation.

We see this partly in the way that the current government believes that publication of masses of data negates the need for freedom of information legislation, never mind that it is not solely pure data that the governed wish to obtain. It’s also the kind of information that the state wishes to conceal by using methods which, they believe, circumnavigate existing legislation. And now we understand that the recently replaced Justice Minister, Lord McNally, has indicated that the government is to consult on FoI restrictions. From the Campaign for Freedom of Information blog:

…the Justice Minister Lord McNally says the government is not committed to implementing all the proposals it has put forward but adds “It is however right that we should seek to ensure that the costs the FOIA imposes on public authorities are not excessive, especially in the current economic climate, and are proportionate to the many benefits that the FOIA brings.”

The minister says that the government’s aim “is not a widespread reduction in transparency but to focus on the small minority of requests which are disproportionately burdensome”. However,  the proposals are not targeted at particularly burdensome requests but would restrict access by allusers, including those making occasional requests of modest scope.

The government is still considering the options, Lord McNally says, and will consult the public “in the near future” on those it decides take forward. It seems likely that further moves to restrict the Act are on the way.

The mechanism available to us through the development of the internet provides us with an opportunity to create a truly open, transparent and democratic system of governance. A system that ensures that the individual is free from state deception and that gives the governed the right to full public disclosure on all matters pertaining to peace, security, ecology and finance. At present the balance is too heavily weighted in favour of information flowing upwards. And that is not to any of our benefits.