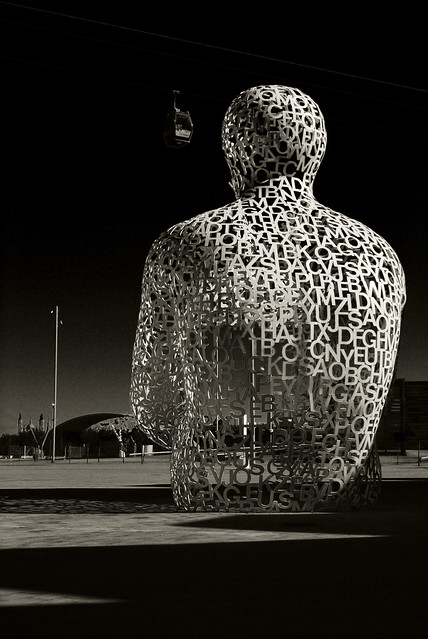 Corporations want your data as much as governments want to snoop.
(Image: El Alma Del Ebro in Zaragoza by Saucepolis on Flickr.)

In contrast to the growth of these ‘benign forces’ of the internet, governments and politicians have become increasingly suspicious of the technology, predominantly because it is an area over which they do not feel they exercise sufficient control.  In the UK, this has manifested itself most obviously and most recently in the Data Communications Bill (or Snoopers’ Charter).  A particularly invasive piece of legislation that was seriously considered by the coalition, it proposed to grant powers to the Home Secretary (or another cabinet minister) to order any ‘communications data’ by ‘telecommunication operators’ to be gathered and retained, effectively collecting ostensibly private data on citizens for whatever purpose they deemed worthy.  It appears, on the face of it, that these proposals have now been abandoned, although that is not to say they won’t come back in a slightly modified form.  If one were a cynic, one might suggest the Liberal Democrats applied pressure to drop the legislation in advance of the local elections to ensure they were case in a positive light? Unlikely perhaps, but my cynical mind can’t help but believe there is more to this than simply a matter of principle, after all Nick Clegg wasn’t always so opposed…

This suspicion, however, doesn’t begin and end at the Snoopers’ Charter. There was also, for example, the introduction of the Digital Economy Act, which enables the blocking of website access for anyone who is deemed to have infringed copyright laws but, consequently, also risks penalising those entirely innocent of any such activity.  Then there is the Regulation of Investigatory Powers Act 2000 (Ripa) used to investigate Osita Mba, a whistleblower who uncovered a “sweetheart” deal with Goldman Sachs.  Using Ripa:

…HMRC can see websites viewed by taxpayers, where a mobile phone call was made or received, and the date and time of emails, texts and phone calls. According to the revenue website, these powers “can only be used when investigating serious crime”.

And it doesn’t end with proposed or existing legislation; individual politicians have also made calls for illiberal and unhelpful restrictions on the internet. Back in 2011, following the riots, one politician called for Twitter and Facebook to be blacked out during any further disturbances.  Needless to say this was a particularly stupid and disturbing suggestion, not least because the very same social media helped people in the area affected by the riots to communicate with others and ensure their own safety.  There’s no doubt that the freedom provided by the internet frightens those who believe it threatens existing power structures, underlining that, from their point of view, freedom only goes so far…

The desire to highlight some of these illiberal measures isn’t solely restricted to organisation such as the Open Rights Group, many of the giants of the internet are quick to point the finger at the role of government as a threat to the freedom of the individual. Take, for example, the largest of all the companies to emerge in the internet era – Google.

Last week, in an article for The Guardian, Eric Schmidt (executive chairman) and Jared Cohen (Director, Google Ideas) warned that global governments are monitoring and censoring access to the web, which could lead to the internet becoming ever increasingly under state control.  The usual examples are rolled out of authoritarian regimes seeking to restrict what their citizens can access online.  Curiously, however, there is no mention of the United States or Europe (Russia appears eight times, China seven), it appears that we are not affected by the government monitoring or censoring access to the web – oh, apart from the Data Communications Bill, the Digital Economy Act, Ripa etc etc.This omission seems curious considering an admission by Schmidt in a separate interview with Alan Rusbridger, also in The Guardian.

During the interview, Rusbridger notes:

But [Schmidt’s] company collects and stores an extraordinary amount of data about all of us, albeit in an anonymised form. Which is all well and good, until government agencies come knocking on Schmidt’s door – as they did more than 20,000 times in the second half of last year. The company usually obliges with US officials. (It’s more complicated with others.) This will only get worse.

Clearly, as the legislative examples shown above demonstrate, attempts to monitor the web are not only restricted to authoritarian regimes but are also a problem in Western, (supposedly) liberal democracies as well.  When the US is making 20,000 requests in six months (around 100 requests a day on average), it is clear that the problem is not restricted to just China, Russia and other authoritarian regimes.  But there’s another side to this equation. A side that Schmidt and others in the business community seem to be reluctant to talk about, for very obvious reasons.

The extract from Rusbridger’s interview with Schmidt reveals two facts that everyone concerned with the internet and the free flow of information need to be worried about.  First are the actual requests from US officials for data from Google. The second is the data that Google collects and makes available to US officials.  There are, I would argue, two concerns about the future of the internet: government control and corporate control. The former Schmidt is keen to talk about, the latter not so much.

Google’s business is data.  They collect data from users to ‘enhance the user experience’ (a brilliant phrase used to suggest that the collection of your personal data is actually doing you a favour).  The volume of data collected is vast and is collected for a specific purpose: to make money (to “enhance the user experience”). These services do not charge you to make money, they use a commodity you are giving away for free and then selling it on to advertisers. The transaction is different from the traditional service model (consumer purchases goods from service provider), but it is effective and relies on your data to ensure profitability for the service provider. For example, Google was making $14.70 per 1,000 searches in 2010.  Some services do not even require you to visit the service itself to obtain your personal data.  Facebook, for example, has been known to track light users of the service across 87% of the internet. 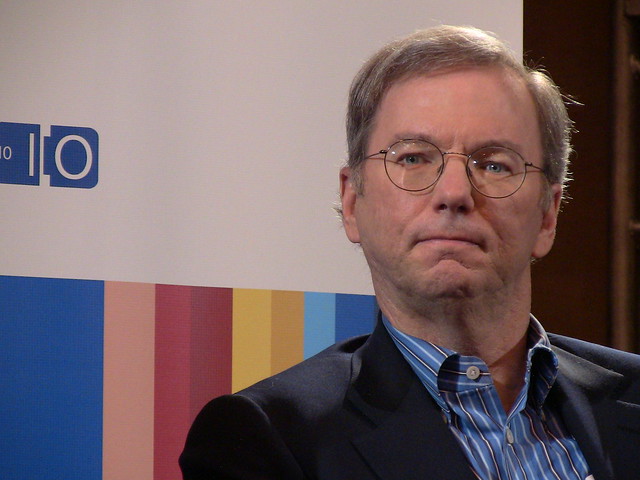 The sheer volume of data handled by many of the largest internet companies should be a cause for concern. Indeed, not only is the data collection itself a concern, but also the willingness with which they give it up to government agencies (note in the aforementioned interview, Schmidt suggests that Google usually say yes to government requests for data).  Of course, many would argue that there is nothing to fear about the collection of personal data: if you have done nothing wrong etc. But you are not in control of the personal data and the rules that govern its use, corporations and governments are. Imagine for a moment a different type of government, a different set of rules, a different environment altogether, would you be so keen on US officials demanding your data and it being handed over as easily as Google do now? And what if Google engineered this change in government? Sounds far-fetched doesn’t it? Maybe it’s not as far-fetched as it might sound…

A recent study by United States-based psychologists, led by Dr. Robert Epstein of the American Institute for Behavioral Research and Technology, revealed the disturbing amount of power at the hands of companies like Google. Epstein’s study found that Google has the capability to influence the outcome of democratic elections by manipulating search rankings.  The study (available here – PDF) presented three groups of eligible American voters with actual web pages and search engine results from the 2010 Australian general election. Participants were randomly assigned to one of three groups, two groups were provided with search engine rankings favouring one of the candidates, the remaining group were provided with rankings that favoured neither:

Beforehand, individuals reported having little or no familiarity with the candidates at all. Based on short biographies, they were asked to rate each candidate and say how they would vote.

They then spent time gathering information using a mock search engine, after which they again rated the candidates in various ways and again said how they would vote.

Before their Internet search, there were no significant differences in how they rated the candidates. Afterwards, however, two thirds of the people in the first two groups said they would vote for the candidate that was favored in the search rankings – a dramatic shift that could easily “flip” the results of many elections, especially close ones, concludes the report.

Now, there is nothing to suggest that Google have actually weighted search results in the way suggested in the study nor that they ever have the intention of doing so, but they can. Not only can they do it, but they can do it without our awareness of such manipulation.

Governments may attempt to monitor us through the introduction of ever more illiberal regulatory measures applied to the internet, but it’s important to remember that the corporations profiting from the internet also benefit from our manipulation.  It strikes me that there are two crucial considerations that we need to remember when we reflect upon the role of the corporation (as opposed to that of the state) in the development of the internet:

1)      The relationship between the user and the service.  Unlike traditional relationships, we are not simply the consumers purchasing goods from a service provider.  They are taking data from us and selling it to advertisers to make money.  Our data is the product and we are the vendor.  The problem is we are not remunerated for this transaction, only permitted to use a service under the terms stipulated by the service provider.  They are not acting out of kindness in offering such services for free, they want more data from users to increase profits.  Users need to be more aware that they are the vendors in this relationship, not the customers.  Of course, we believe and trust them because we are not ‘buying’ from them, we still see them as providing us with something for free when actually they make their money using our data.

2)      Considering the volume of data given away, there is a need to remind ourselves of the nature of government and corporations.  Like governments, corporations are not fixed.  Corporations change.  They change either because of a need to increase profits, or they change because they have been bought out by a rival.  You may well be happy giving Google all your data, but what happens when it is no longer Google?  What if your personal data fell into the hands of a company you were not comfortable gaining access to it?  What then? And whilst a takeover attempt of Google may seem far-fetched at this point, remember that that the very idea that Time Warner would merge with a company called AOL was a fanciful notion towards the end of the last century. Nothing remains static in either the worlds of business or technology.

Above all else, however, we need to remember that companies like Google and Facebook are just that: companies. Whilst they appear warm, fuzzy and less stuffy than traditional corporations, they are still corporations.  Corporations that are acting the same as every other corporation before them, lobbying government to lighten regulation, maximising profit and, where possible, shift the focus onto government shortcomings in the hope that their own activities won’t be subject to scrutiny. They are, after all, just corporations like any other and we should treat them with the same scepticism as we treat older, more established corporations.  For when it comes to the internet, we need to keep a close eye on both the governments who regulate it and the corporations who profit from it.