I recently wrote an article for The Guardian exploring some of the ramifications of Iain Duncan Smith’s plans to make the Universal Credit system online-only.  As I have demonstrated here many times, there remains a very real digital divide for many millions of people; a divide not simply in terms of a lack of access, but also in a lack of skills to make full use of the technology. Unsurprisingly, many of those of working age caught on the wrong side of the divide tend to be the poorest in our society.  As a result, the intention to push the social security system online led to some very serious concerns, which in turn led to my article for The Guardian.

Since writing that article, I have spoken to a number of jobseekers who have personally experienced this drive to force them to use government web portals in order to seek out employment.  Their experiences are worrying and underline the fears raised by so many about the impact of forcing jobseekers online.  So I thought, rather than just repeat my concerns borne out of my understanding of the impact of this system, I should just ask one of them if they would be willing to write about their experiences for this blog.  They agreed. The following underlines, in my view, that neither Universal Jobmatch, nor the Universal Credit System, is fit for purpose.  The government needs an urgent rethink of its policies towards jobseekers because the danger is that government policy will trap them in poverty, not help them back into employment.  I only hope that the Opposition wake-up and challenge the poverty trap being created by the Coalition.

Anyway, here is one jobseeker’s experience of the new systems introduced by the coalition government…

Do you want to know how easy it is to become unemployed, and fall into that delightful category so beloved of this government of “skiver”, and be tagged with all the implications of laziness and fecklessness that it implies? It’s simple: all it takes is for your employer to make some bad business decisions, and there you go – you and everyone you work with can become instantly unemployed. In my case, this was done within 2 days, and we were all out the (securely locked behind us, hope you carried out everything you needed already) door, with the joyous additional factor of being given no notice or redundancy pay. What do you mean, you have financial commitments dependent on that pay packet you were expecting this month? Well: tough luck, you’re a Skiver now. A New Skiver.

Trying to struggle through the numbing shock in order to leap into action to fill out endless forms and kick off various processes was horrendous, but the good thing is that I’m pretty well educated, and I have the skills that mean that although the whole experience has been traumatic, I’m fairly confident that I’ve given the right information to the right people, at the right time, and I have the skills to find the right places to look and apply for jobs.

Now, I registered as a Jobseeker using my laptop, and my home internet connection, and I printed out confirmation materials and other documents that I needed using my own printer/scanner. I was lucky: I could do this comfortably at home, but it was a demanding process in many ways, asking me for information I either had to dig out of my household file folders, or that I had to log on to other sites to get, like the details of my bank savings and current accounts. It’s not something I would have wanted to do with strangers around, or in a public space. But what are your options, when you aren’t lucky enough to have these facilities at home? You go to a library, and make use of the facilities there…if you have a library…and if they have public computers…and if you can get time on them…and if you can input the information needed within that time…and if you have the computer skills to be able to understand what’s being asked of you by the forms, and how to respond appropriately. That’s a lot of elements that need to come together, in order for you to be able to get online.

What about the people who don’t have computer skills?

There is a current assumption in government that absolutely everyone has a computer, an internet connection, and the skills to use these together to gain access to information. This year, Universal Credit will replace various benefits, and there’s an expectation that recipients will manage their information online. But from my experience of government websites, it’s just going to be a horrible, painful mess, and the people who’ll suffer are the ones who’re least able to cope: those without internet access, and those without computer skills. Like the man I overheard while in the Job Centre, telling his advisor that he can only get internet access at his girlfriend’s house. What happens if that relationship breaks down? What about the people who don’t have computer skills?

As for the government websites that are meant to be getting people into employment…oh my!  Universal Jobmatch is the official government website for Jobseekers. It’s useless. Utterly, utterly useless. To start with, you have to be able to log in. As I’m writing this, it’s spent 25 minutes NOT logging me in, and I’ve had to give up and leave it. Ok, that’s not a huge problem for me, sitting at home, but what if you’re using a computer that you only have limited time on? That’s 25 minutes that could have been put to better use, but instead has been wasted waiting for a clunky website to decide to let you log in.

…jobs are still advertised long after their closing date…

The biggest problems that I’ve found with the jobs being advertised on Universal Jobmatch is that jobs are still advertised (and the system is allowing you to use it to apply for them) long after their closing date, and the fact that the system is inviting Jobseekers to apply for jobs in an utterly inappropriate manner. For example, I found a relevant post, and did as it requested, and used the site to send the employers my CV. I heard nothing further, and when I checked the progress of the application a few days later, the job was marked mysteriously as “closed”. Soon after this, I found the same position newly advertised on the site of the employer, where it specifically stated that CVs would not be accepted, and their own application process must be completed. Universal Jobmatch was giving the completely wrong information, and if I hadn’t known to follow this up at the source, I’d have lost the chance to apply for that position.

The site also insists on sending me alerts for jobs that haven’t even a tenuous link with the categories I have marked as my interests (the suggestions of a telesales role or a care home assistant are my personal favourites, when I’m looking for information professional or social media work), yet when I log in to look at them, and it asks me why I’m not applying for them, there’s no option to say “because this is utterly irrelevant to my requirements, your system is awful”. I’m waiting to see how long it is before I get told off for not trying hard enough in their systems. It’s actually so bad that I refuse to use it if I don’t have to, but that’s because I have other, better job sites available to me to use. What about the people who’ve been told that they MUST use the site, and don’t have the skills to know where else to look, or how else to do things? The site is so bad it’s almost certainly losing people the chance of employment, rather than helping them to find it.

So, what’s the future for us New Skivers? Apparently, one where we’re fighting for space in a library, wedded to a computer, spending frustrating and pointless hours wrestling with the Universal Jobmatch site, wasting time trying to get into a site that we can use to apply for jobs that closed weeks ago, using a format that the potential employer won’t accept. That’s definitely going to help people move from Skivers to Strivers….right? And anyone who doesn’t think the Universal Credit and Universal Jobmatch are amazing must just be happy being a skiver, and they’re loving the decadent lifestyle that their £71.70 a week Jobseekers Allowance enables them to live on.

I have also been sent the following which I felt should be attached to the bottom of this post. It’s taken from a booklet called “Jobseekers Allowance: your responsibilities” and appears to be rather authoritarian in tone: 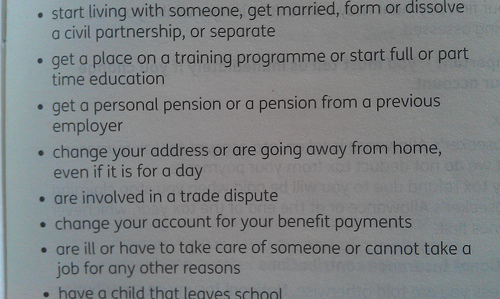 Note: you must tell us if you leave your home, even if only for a day.  Seems rather unnecessary to report on your whereabouts if out for the day…