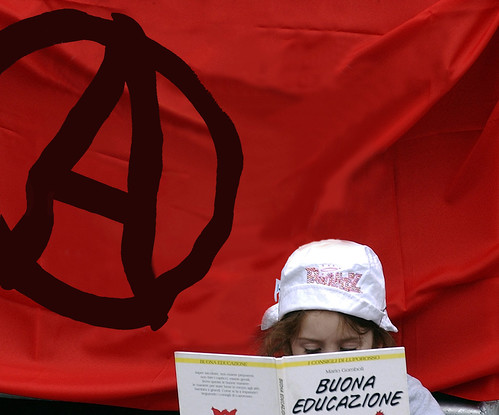 Would students welcome greater collaboration and the illusion of control?
(Image c/o Roberto on Flickr.)

When thinking about the possibilities for partnership, I got to thinking about the success of social media.  Here are a bunch of services, created by experts, that are then made available to users for free…these services subsequently become incredibly popular.  But what makes them so popular with users?  Is it simply because they are free (doubtful as many free services never catch on) or is it because, as I would argue, they provide a service the user sees as valuable and that provides them with an “illusion of control”?

All social media provides users with a certain degree of control.  You control your privacy, the content you post and, to a certain extent, you control how it works for you.  This illusion of control bestowed upon the user is what, I think, helps to maintain loyalty.  As long as they feel that there is an element of control, they are content with the service and will continue to use it, building their networks and finding new ways of using the technology.  The problem starts when the limits to our control become apparent.

Whenever there is a slight change in service, users tend to take to the social media platform affected and loudly complain about the change, or the loss of control.  Take, for example, the continual changes to Facebook’s privacy settings.  Initially they were clear and easy to understand then, as the need grew for Facebook to monetise the data it has on users (the data the user has been led to believe they control), so came multiple changes to the privacy functionality.  With each change to this functionality came less control and increased dissatisfaction with the service (to the extent that many have left due to the loss of control of their data).  Of course, the service still remains incredibly popular, but with each loss of user control the service loses another slither of users.

Similarly, Twitter receives a great deal of criticism from users whenever it reduces the level of control users have on the service.  One of Twitter’s great strengths early on was that people could build on it and enhance the user experience (I’m thinking services like Tweetdeck which served a very useful function for many when it was first released…and continues to do so).  Other users would then utilise these additional services feeling that they had a degree of control over how they interact with Twitter, they could choose which app they utilised and didn’t need to restrict themselves to ‘official’ applications.  However, as with Facebook, there has been a growing need to monetise content/data which has resulted in third party apps rapidly diminishing as Twitter seeks to control content and, therefore, its users.  Users increasingly have no choice but to use ‘official’ Twitter applications to make effective use of the service.  From making the service one that the users built on and controlled (albeit in collaboration with the people behind Twitter), it has increasingly become one that Twitter fully controls, reducing the role of the user in its development.  This, in turn, has led to a low rumbling of discontent amongst service users as the tools that they utilise have gradually been taken away from them, taking control out of their hands and putting it in the hands of the service provider.

More recently, the furore over Google Reader demonstrates the response when a useful service that users can build upon, control and use in a way that meets their needs is taken away from them.  Indeed, as one commentator points out, there is now a trend away from user control as services increasingly come to the realisation that money is more important.  What we have seen is that services grow quite rapidly on the basis of this illusion, at a key point control is then shifted back to the service creators, away from the service users, which then leads to a (modest admittedly) degree of negative rumbling about the service.  In other words, users are fine with the service so long as the illusion remains.  Shatter the illusion and people begin to question why they use the service and may even stop using the service altogether.

In terms of social media, therefore, removing an element of ‘control’ from the user can lead to a substantial degree of dissatisfaction with the service.  But the key thing to remember is that there was a high degree of satisfaction initially leading to a kind of evangelism, preaching the value of such tools to friends and acquaintances, massively increasing the user base and encouraging others to build tools on top to add value to the service  And it was, in my view, the illusion of control that created this sense of devotion and affection for these services.

Another example is cataloguing.  I am a big fan of folksonomies as a cataloguing tool in libraries (caveat: whilst information retrieval was my highest scoring module, I am no cataloguer!).  Rather than a librarian classifying an item using their terminology and a formal classification scheme, why not enable the users to classify items using their own language?  Such a system would be more democratic, less hierarchical and ensure that classification is derived from the users’ language rather than that of an authoritative, hierarchical taxonomic scheme subjectively employed by a librarian.  However, the system would have its own limited controls to ensure preservation of the illusion of user control.

In completing one of my assignments on information organisation and retrieval [PDF], I looked at how folksonomies could be deployed in libraries with particular reference to Delicious, a tool that allows users to categorise articles on the internet (quite effectively until it experience a serious decline).  Picking an article by Peter Merholz, it was clear that whilst there was a wide range of tags applied, there appeared to be a general consensus amongst users about the subject of the text.  Bookmarked (at the time) by 56 Delicious users, it had 61 different tags applied to the item.  However, what was clear was that after the first three tags applied there was a steep drop off in popularity of the remaining tags.  What emerged was a consensus around three main tags: “metadata”, “tagging” and “folksonomy”.  What this suggests is that not only did users identify common themes, but that it is possible to develop a controlled vocabulary at a certain point which could then be utilised to ‘encourage’ users to tag the item in a particular way.  This could be achieved by either adding the most common tags by default to the user’s classification, or by indicating that they are “suggested tags” (as it does on Delicious).  This ensures that there is a certain degree of ‘control’ whilst also enabling the user to add further tags that are relevant to them. As I concluded in my assignment:

This combination of controlled vocabularies and user-based tagging is not only useful for indexing information materials on the internet, it could also be use to allow library users to search photos within library collections, as well as books that are available through the OPAC. User-based tagging does have its limitations, but in combination with the principles of a controlled vocabulary, the possibilities of providing a service more relevant to the end user should outweigh any concerns about its application.

As with social media, giving the user illusion of control over elements of the service may increase their engagement, increase their loyalty and turn them into evangelists for the service.  Working in collaboration with users to a greater extent may result in substantial benefits for both user and service.  They buy into a service that is much more responsive to their needs, able to adapt and create more flexible services, and the service builds loyalty and increased usage.  But, do users really want this level of collaboration?  Are they happy for the service to determine how they interact with it, with limited input other than when the library permits it?  Or do they actually want more input and a greater sense of ‘control’ of the resources they are using?  I guess it would be ironic to impost a system of collaboration upon users if they had no interest in collaborating with the service.  But then again, maybe they would be interested in closer collaboration…