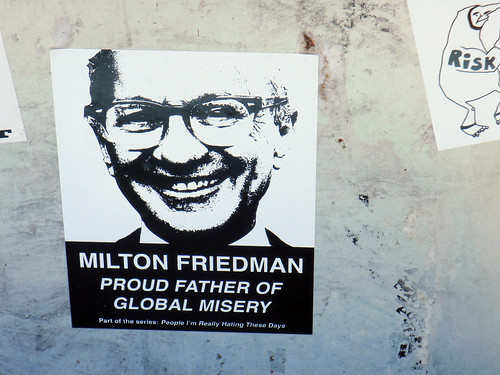 Are we truly free in a free market economy?
(Image c/o Daniel Lobo on Flickr.)

The notion that capitalism and free choice go hand in hand seems to be incontrovertible. For decades we have been led to believe that the two are interdependent. Freedom of choice and individual liberty are only possible in a capitalist society built on the foundations of a free market. As Milton Friedman, the arch-capitalist and God to the economic far-right, once claimed:

“Underlying most arguments against the free market is a lack of belief in freedom itself.”

According to the Friedmanite far-right (and let’s not kid ourselves, Friedmanites are on the far-right), true individual freedom is borne out of a free market. Without such an economic model, there is no freedom, no liberty, no freedom to choose – at least, that’s as they would have it.

It speaks volumes for the times we live in that this ideology is accepted as a given. As we know the dogma of the economic far-right has been broadly accepted as the only theory in town. There are slight deviations from the ideas and models outlined by Friedman and his acolytes, but they are slight. Both the centre-left and the centre-right have adopted the language and ideology of the far-right economists, pushing the notion that if we are to be a truly free society, we need to consolidate the free market economy. But is this really the case? Are we a free society under a free market model?

Fundamental to any definition of freedom is the ability for the individual to be able to choose freely. Without freedom of choice, you have a fairly limited freedom. But to be able to choose you need to have the tools at your disposal to make informed choices. You cannot make a choice if you do not understand the nature and implications of the choices that you make. The ability to choose freely is, therefore, central to any notion of liberty.

I recently stumbled across a blog post by Puffles that underlines a key issue regarding choice:

For ‘choice’ to work, you need the means to exercise it. In neo-liberal world, this particularly means having the money. But it also means having the information, knowing how to use/interpret it and also having the time to do so.

In a free-market economy, true liberty is dependent on both income and access to information. Furthermore, it does not necessarily follow that if you have the means at your disposal to access information that you are also in a position to interpret and utilise that information in order to make free, informed choices. Of course, all of this is dependent on whether the information is available to make those choices in the first place. Very often, the information we need to make rational choices is not publicly accessible.

Whilst it is often suggested we live in an ‘Information Age’, in many respects we still face familiar barriers in terms of the control of the flow of information. Whether it is the state or corporate interests, there still exists forces which attempt to disrupt the flow of information, preventing the development of a fully informed citizenry able to make rational choices. Indeed, in a capitalist economy it is in the interests of both the state and corporations that we do not enter a state of total transparency where citizens have access to information and therefore can make informed choices. The consequences for both corporations and the state of a society entirely transparent would be devastating.

“…drug companies can hide information about their drugs from doctors and patients, perfectly legally, with the help of regulators. While industry and politicians deny the existence of this problem, it is widely recognised within medical academia, and meticulously well-documented. The current best estimate is that half of all drug trials never get published.”

“…while regulators should be helping to inform doctors, and protect patients, in reality they have conspired with companies to withhold information about trials. The European Medicines Agency, which now approves drugs for use in Britain, spent more than three years refusing to hand over information to Cochrane on Orlistat and Rimonabant, two widely used weight loss drugs. The agency’s excuses were so poor that the European Ombudsman made a finding of maladministration.”

The free market, with its insistence on light touch regulation or ineffective regulators, enables an environment where information about trials is withheld from doctors, professionals who rely on information to make crucial decisions affecting the lives of their patients. Where there is regulation, it is so loose as to allow regulators to conspire with those they are supposed to be regulating. By withholding this information, not only are doctors not able to make the appropriate choices, but patients’ lives are put at risk. And for what reason? Because it would damage corporate profit, as Cory Doctorow underlines in an article on Goldacre’s book:

Paroxetine, a drug that was known to be ineffective for treating children, which had a risk of suicide as a side-effect, widely prescribed to children, because GlaxoSmithKline declined to publish its research data after an internal memo stated “It would be commercially unacceptable to include a statement that efficacy had not been demonstrated, as this would undermine the profile of paroxetine.

The food industry is another example of the gap between what free market advocates claim and the reality of liberty in a free market economy. For several years there have been calls to better regulate the food industry. Ultimately, all previous attempts have failed because corporations have argued very strongly that any such regulation would actually hurt consumers rather than ensure they are better informed. As a result, instead of ensuring strictly applied regulations, governments have encouraged voluntary systems that they believe are sufficient to protect the consumer and provide the information they require to make those informed choices.

As I wrote back here, intense efforts were made by the food industry to prevent the EU from introducing a mandatory traffic light system, a system that would have enabled the consumer to make a more informed choice about the food they bought. Rather than adopt a system that would provide the consumer with more information, the food industry spent €1bn lobbying to maintain the status quo. Again, the reasoning is clear. Regulation designed to make the industry more transparent will hurt profits and so, as with the pharmaceutical industry, the needs of the business come before the needs of the consumer. With government unwilling to legislate, corporations will ensure that their profits are protected by resisting any call for transparency. Strictly appplied regulation can enable corporate transparency, the free market prevents it. In essence, the free market inhibits the individual’s freedom of choice by placing corporate profit above transparency.

Is the free market compatible with genuine freedom of choice? I would argue that it is not. It is clear that transparency is a threat to corporate interests and, therefore, it is crucial that citizens are not prevented from accessing information with which to make informed choices – a mark of true liberty. You cannot exercise freedom of choice if you do not have access to the information with which to make that choice. In order to do so, you must have both access to information and the means with which to understand it. If corporate interests are unwilling to provide such information to ensure informed choices, it is incumbent on government to ensure that information is made available via the levers available to them. The introduction of strictly applied regulation, enforced transparency across the corporate sector and the death of far-right free market economics will enable true freedom of choice. The free market never can.