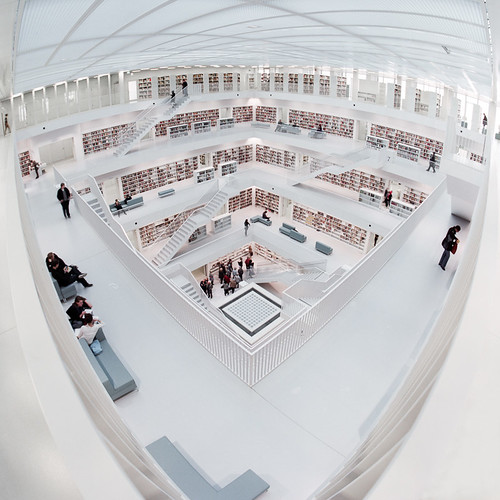 A couple of months back I was privileged to be invited to speak at a CPD25 event in London on engaging with students and obtaining feedback.  As a result of my background in a range of public facing management roles in both the private and public sectors, I was more than happy to share some of my perspectives on this particular aspect of service delivery.  In this case, I was asked to present something on how social media could be utilised in obtaining feedback and engaging with users.

Engaging Students: Obtaining And Using Feedback In Libraries And Universities explored a range of different aspects of university and library engagement with students. As well as my presentation on social media and student engagement, there were sessions on Anglia Ruskin’s Customer Service Exellence (CSE) and “Tell Us” feedback scheme; the University of Leicester Library’s award winning approach to engaging with students and the University of East London’s International Student Barometer.

Anglia Ruskin’s renewed focus on student engagement and obtaining feedback emerged as a result of disappointing student survey results.  Recognising a clear need to act, a working group was formed which ensured that every faculty and support service was represented.  This was an important move as it ensured that staff across the university were engaged and involved in the move to address the survey results.

A number of tools were employed by Anglia Ruskin as a result of the focus provided by the working group.  Amongst them were students acting as ‘mystery shoppers’, visiting the library and completing a survey on their experiences (and paid £15 for their trouble!) and a student charter outlining expectations which is monitored and reviewed across the year.  In 2009, they launched their “Tell Us” feedback scheme which encouraged students to feedback on their experiences of using the library service by completing a form and posting it in one of numerous post boxes placed around campus.

Whilst the response was initially slow, the introduction of webforms and a telephone number (as well as an email address and the paper form) and the promotion of the service during National Customer Service Week, led to a big increase in uptake by students.  The latter in particular encouraged students to provide face-to-face feedback and did much to raise awareness of the scheme.  So much so that, in 2011, over 500 forms were submitted over the course of a week.  Last year, around 500 forms were also submitted over a three day period.

As well as encouraging feedback, Anglia Ruskin also communicated with students to demonstrate that they were acting on the feedback they had received through a “you said…we did” service.  However, as well as communicating the things they did do, they ensured that if they weren’t able to act on the feedback provided, the reasons for their inability to act were explained clearly.  By doing so, it ensured it addressed the potential for a perception that the some concerns were ignored.

Overall, the scheme appears to have been a great success in both obtaining feedback and in engaging with students.  However, Anglia Ruskin do not appear to be resting on the laurels and are conscious of the fact that without ‘freshening’ things up a little, the posters and activity can become ‘wallpaper’ and, as a result, are currently looking at ways in which they can freshen things up.  It will be interesting to see what they come up with!

Following Anglia Ruskin’s “Tell Us” scheme, Jo Aitkins of University of Leicester Library talked about how an award winning library obtains and users student feedback.  The University’s library team was named as “Outstanding Library Team of the Year 2012” in the Times Higher Education Leadership and Management Awards and so clearly their perspective on engagement and obtaining student feedback was a very valuable one. Indeed, their scores in student surveys (90%) underlined the extent to which other institutions can learn from their approach.

In terms of ensuring that there is a high degree of engagement with students, focus groups are run with departments across the university to talk to students and obtain their feedback. Sometimes the feedback will focus specifically on the department itself, sometimes on the library and that dialogue has, according to Jo, been a big help in understanding the needs of their students and users and, most importantly, taking action to address these needs.

For example, one of the complaints from students was that there wasn’t enough books (a familiar complaint!) so the library invested in a significant volume of ebooks and ran a “more books” campaign, asking students to advise what books they haven’t got and then purchasing them as appropriate.  Again, listening and understanding the problem was not enough, being seen to deal with the feedback was absolutely key to their strategy.  If feedback exercises are conducted without any tangible for the student at the end of the process, the effort put into obtaining feedback is wasted.

Feedback was obtained from students in a wide variety of ways.  The team meet regularly with the President of the Student Union (on a termly basis) to consult on whether the library is meeting the needs of students, library website statistics were analysed to understand what they are using and how and mystery shoppers have also been utilised (students or staff from other university libraries).  They have also introduced “happy cards” which are handed to students when dealing with queries to provide feedback.

As with Anglia Ruskin, Leicester make a concerted effort to communicate with students what they have done to address feedback to ensure both that students are clear on what the Library has done to address the feedback they have received, and to demonstrate that engaging in the feedback process is worthwhile and benefits them.  And, as with Anglia Ruskin, they are aware that there is a need to renew and refresh the approach, employing new techniques to encourage feedback so that it the feedback service isn’t overlooked by students.

Next up, Niru Williams of the University of East London talked about the International Student Barometer.  Whilst this wasn’t directly relevant for my role, it was interesting to hear how UEL ensures that international students are not forgotten about when it comes to feedback and engagement, particularly as they had won the ‘Outstanding International Strategy Award’ at The Times Higher Education Leadership and Management Awards 2012.

In terms of the strategy employed at UEL, the International Student Barometer (ISB) was independently surveyed by i-Graduate which surveys the entire international student journey through a confidential online questionnaire which is customised and adapted according to the needs of each institution.  The information obtained from this questionnaire is then benchmarked globally, nationally and regionally, reviewing all aspects of the student experience.  At UEL, they have also requested that the data is broken down by schools to enable them to clearly identify any issues across the university.

The information taken from the questionnaire then fed into school and service plans, whilst also ensuring that the whole team were engaged and were given ownership of certain aspects of the scheme.  As a result of their work with the ISB, awareness has been raised across the institution of its importance which obviously has a knock-on effect in terms of a greater focus on the needs of international students and resulted in greater engagement in the process by academics and support staff.

After Nia, it was my turn to speak about using social media to engage and obtain feedback.  If you are interested in finding out what I had to say, you can read a bit more about it on my earlier blog post (I’m obviously not going to go into it in great detail here!).

Overall, it was a really interesting and thought-provoking event which gave me plenty to mull over on the way home.  Personally speaking, I think it is so important to do more than just listen to students.  It is all about both engaging with students and also communicating with them in a way to demonstrate that their feedback is listened to and, where possible, action is taken to address aspects of the service that they are not happy with (and if it is not possible to do so, then the reasons why not should be explained openly and honestly).  Engaging with students and creating a truly user-centric library service in higher education has never been more important than it is now given the nature of the environment the government has imposed on all of us.  I don’t like this imposed environment, but whilst we are stuck within it we need to make every effort to ensure that we work closely with students to ensure we meet their needs.

Many thanks to both Peter Williams (UEL) and Judith Wells (Anglia Ruskin) for inviting me along to talk about social media, student engagement and building a better library experience.