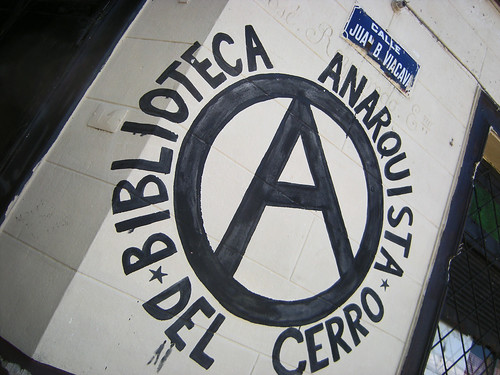 Should libraries be more…anarchistic?
(Image c/o seven resist on Flickr.)

One of the things I have been mulling over for some time now, is the idea of overturning the hierarchical structures in libraries.  That sounds rather grand…probably grander than it actually is.  I guess what I have been pondering is whether we can turn the library service from being run in a ‘top down’ fashion to one that is more of a collaboration with users.  One where the professionals and the users work in tandem rather than professionals selecting resources and then telling the user what is available and how to use it.

It’s hardly a radical idea, much of what would constitute a non-hierarchical library service is already in action.  Take patron driven acquisition (PDA) for example.  PDA is, essentially, a method by which materials are purchased for the library based on known patron demand.  This has been used in a number of academic libraries already and is probably no longer the radical new idea that it was when it was first rolled out.  However, the idea is not restricted to academic libraries, teenagers have also been involved in the stock purchasing process in public libraries (again, not something massively new despite the spin in Surrey’s press release).  But what if this level of involvement by users in the purchasing process was extended across the whole of the library?  From books to databases to equipment…could this even work?

I’m not even clear myself how a non-hierarchical library would operate or whether it is even feasible to enable a situation whereby both the user and the professional have equal control over the library service, how it is delivered and what resources it makes available.  Could you ever, in either public, academic or school libraries, allow the user to have complete equal say in the running of the library service?  Is it possible for user and professional to work in real partnership?  How would it work if such a relationship was developed?  Maybe some people feel that their library service already works fully in partnership with its users.

But it’s not just in terms of working in partnership with users, a non-hierarchical library wouldn’t levy fines for late returns (what is more hierarchical than inflicting a punishment on a user to control and influence behaviour?).  Again, this is not a new idea (this article on the initiative dates from 2006), there is nothing radical or revolutionary about introducing such a system.  But it is another step towards creating a hierarchy free library service. One in which the service is not seen so much as us (the professionals) and them (the users), but as an equal partnership, with no divide between the two and no hierarchy to assert authority.

Sorry, this has been a bit of a rambly post, but I’d be interested to hear what other people think. Can we develop a true, hierarchy free library service?  Are we already working in true partnership with users?  Do we require a hierarchy to ensure an effective library service?  Would ceding control to library users diminish the service, or would it enhance it?  Is it fair to say that we (as professionals) still ‘own’ the service and should we continue to do so?  I’d be interested to hear what other people think…not least because it will help my vague pondering.